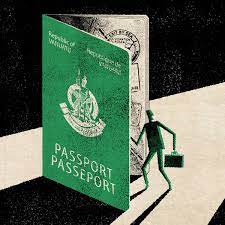 The head of Vanuatu’s Citizenship Commission says a Syrian national had his approval for citizenship revoked, and others are being investigated over concerns that international criminals are buying Vanuatu passports.

It comes after The Guardian revealed last month the identities of some of the people who’ve gained Vanuatu citizenship through the controversial program including fugitives, politicians, disgraced business people from across the world, including Australia.

Commission chair Ronald Warsal said Syrian businessman Abdul Rhaman Khiti had his citizenship approval revoked last week after investigators found out the US government had placed sanctions against his businesses.

“After The Guardian article and during the course of the investigation by our Financial Intelligence Unit there it was decided to have it revoked and money he has paid to be forfeited into government coffers,” he said.

Warsal said others, including those identified in the media are being investigated and could be censured.

“It’s an ongoing thing we want to ensure that people who come to Vanuatu who obtain Vanuatu citizenship are not wanted abroad [and] are not fugitives,” he said.

While controversial, the program remains extremely lucrative, reaching a record high last year of $172 million (US$49 million) to help the country avoid major economic shock from the collapse of international tourism.

Warsal said the global pandemic and the closure of international borders hadn’t dampened interest with up to a hundred applications received per month.

But the scheme continues to be mired in controversy, with claims it’s being used by international criminals to access Vanuatu passports and to a safe haven from the law.

The CEO of Transparency International Vanuatu Dr Willie Tokon said it’s a concern that the Syrian businessman was able to get approval in the first place.

“How come we have all these allegations but the screening by Citizenship Commission and Financial Intelligence Unit didn’t come up with this allegation,” he said.

He’s calling on Vanuatu to seek the help of the Australian Federal Police and Interpol to vet applications, and for limits be placed on the number of passports sold and citizenships issued to foreigners.

COVID-19 cases and deaths continue to decline : WHO