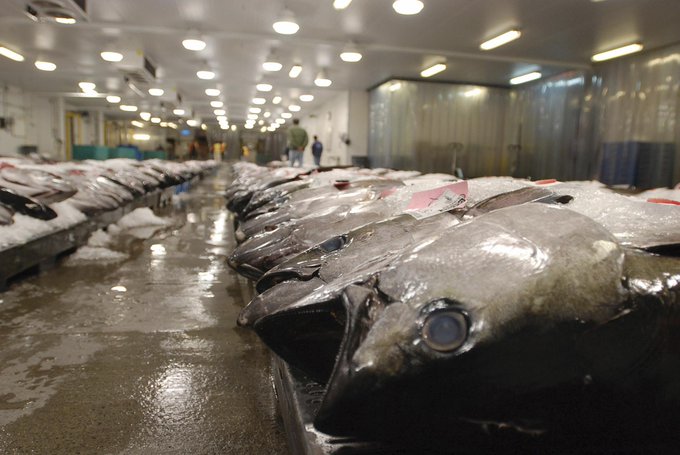 A tuna fishing boat based in the Pacific island nation of Fiji that has been accused of essentially enslaving its crew was blocked Wednesday from importing seafood into the United States, part of an increasing effort to keep goods produced with forced labour from entering the country.

U.S. Customs and Border Protection issued an order to stop any shipments in American ports from the Hangton No.112, a longliner operated by a Chinese national, after the agency determined there was credible evidence that the crew was subjected to conditions defined as forced labour under international standards.

It’s the latest in a series of such orders targeting Asian fishing vessels amid reports that crews made up largely of vulnerable migrant workers from poorer countries are subjected to horrific conditions by operators traveling farther at sea and for longer periods as fish populations decline worldwide.

“Foreign fishing vessels like the Hangton No.112 continue to lure vulnerable migrant workers into forced labor situations so that they can sell seafood below market value, which threatens the livelihoods of American fishermen,” CBP Acting Commissioner Troy Miller said in a statement released ahead of the announcement of the order. “CBP will continue to stand up against these vessels’ abusive labour practices by preventing the introduction of their unethically harvested seafood into the U.S. market.”

Records show about US$40 million in tuna and other fish from the Hangton No.112 have been imported into the U.S. market in recent years despite industry efforts to address the issue, said Ana Hinojosa, the CBP directorate that investigates allegations of forced labour. The agency does not publicly identify the importers who received the shipments.

CBP said its investigation found evidence that the crew of the Hangton No.112 had wages improperly withheld from them, their identity documents were taken and they were kept in “debt bondage,” which typically involves charging workers an excessive amount in advance for travel and other expenses and holding them until they worked to pay if off.

The agency found additional conditions that were “difficult to read,” Hinojoso said, even considering that fishing is a notoriously difficult and dangerous industry. “I wouldn’t call it a fun job, but there are certain protections of human rights that are expected in any kind of working environment.”

In May, the U.S. blocked imports of seafood from the entire fleet of a Chinese company with more than 30 ships that authorities say forced crew members to work in slave-like conditions that led to the deaths of several Indonesian fishermen last year. CBP has also issued orders against individual vessels from Taiwan and elsewhere.

The 102-foot (34-meter) Hangton No. 12 operates with a crew of about a dozen, according to online records. The boat was cited in a December 2019 investigative report by Greenpeace Southeast Asia and the Indonesian Migrant Workers Union that documented abusive conditions in the Pacific fishing fleet. The operator denied the allegations at the time.

Advocates such as Greenpeace say migrant workers, often from the Philippines and Indonesia, are particularly vulnerable to abusive labor conditions, with brokers often taking a cut of their wages and ship operators and companies forcing them to work extreme hours and endure brutal treatment, in one of the most dangerous occupations, with no recourse and no way to escape while at sea.

In recent years, the issue of unregulated fishing has gained increased attention not just for the abusive treatment of workers but also the damage it does to the environment, economies around the world and food supply.

An investigation of the fishing industry by The Associated Press, which received the 2016 Pulitzer Prize for Public Service, resulted in the freeing of more than 2,000 slaves and traced seafood they caught to supermarkets and pet food providers around the U.S.