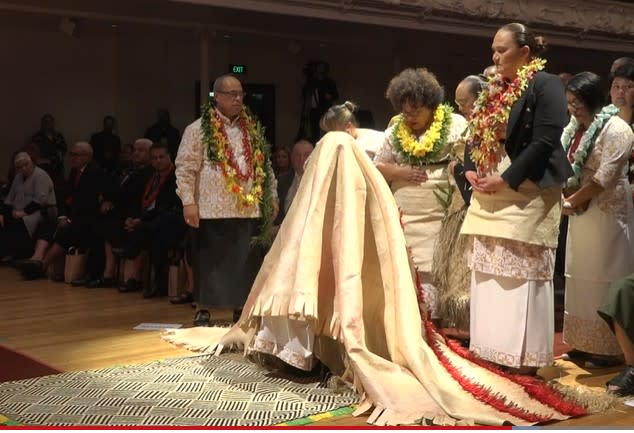 A step in the right direction, but missing a crucial ingredient – that’s how advocates for migrants’ rights describe the New Zealand Government’s apology for the Dawn Raids.

Amnesty for the close to 14,000 overstayers currently in New Zealand would give the apology meaning and stop history from repeating itself, she says.

“There were approximately 260 people deported last year,” she said. “Often back to countries riddled with Covid. They may not be shining lights, in their eyes, but it’s the same process.”

And with just under a third of all overstayers from Samoa or Tonga, there was a distinct connection between the actions of the current Government and the Pasifika-targeted immigration crackdowns of the 1970s.

“The people who are already here pose zero risk,” she said. “Document these workers and give them proper work rates.”

These border exemptions, which are expected to begin late in August, hope to meet the demand from industries like horticulture, enduring labour shortages.

But according to Kaloti, the demand for workers could be addressed in part by getting overstayers on the books.

The Government would miss out on the pragmatic benefits of an amnesty.

“It’s much needed – that’s the call from every corner,” she said. “And for the Government, the Pasifika community is a large voter base.”

In her 18 years in New Zealand, Kaloti said she had never seen businesses cry for help like they were now.

Geoff Scott, General Manager of Verification & Compliance at Immigration New Zealand said 60 percent of overstayers had previously been on a visitor visa, although a significant number from Asia – about 31 percent – last held a student visa.

Most overstayers were aged between 25 and 64 – working age years for most people in New Zealand.

Green Party spokesperson for Pacific Peoples Teanau Tuiono said the apology was an emotional time for everybody, especially his parents’ generation.

To him, the important thing was remembering the connection between what is happening now and our history.

“We need to make sure we don’t compartmentalise the Dawn Raids,” he said. “There’s racism before they happened and there’s racism since.”

Part of this would be broad pathways to amnesty for current overstayers – which Tuiono believed would solve more than one problem.

“We have employers calling out for workers,” he said. “Here we have something like 14,000 workers who don’t need extra housing.”

He believes the border exemptions for seasonal workers don’t need to preclude overstayers from being allowed to get into work as well.

“You don’t think it’s either/or,” he said. “It should be all the things that are possible – and this is very possible.”

Other changes Tuiono would like to follow the apology include compulsory inclusion of the Dawn Raids in the school curriculum.

The Government has forecast more focus on this period of New Zealand history in schools, but at present teaching it would be voluntary and at the discretion of teachers.

“I appreciate the education parts,” said Tuiono. “But I want it to be compulsory – otherwise it’s often easier to sweep uncomfortable truths under the carpet.”

The Minister for Immigration, Kris Faafoi, didn’t rule out an amnesty, saying any decision would be made towards the end of the year.

“I know it’s an issue the Pasifika community has been talking about for a long time,” he said. “Given the apology, it’s obviously an issue.”

In response to claims he was kicking the issue down the road, Faafoi said the Government needed to be sure the amnesty was considered in the context of other visa issues.

“It won’t be looked at in isolation,” he said. “I think it’s a wise policy position to take.”

Immigration New Zealand extended the visas of thousands of migrants last year – a concession not extended to those who already found themselves overstaying.

Tuiono said the feeling was the same across most of communities he had spoken to about the issue. “Whether it’s 1st, 2nd, 3rd or 4th generation Pasifika people,” he said. “Most people see the sense in [the amnesty].”

This was echoed in the emotional response by Princess Mele Siu’ilikutapu Kalaniuvalu Fotofili of Tonga to the apology on Sunday, at Auckland’s Town Hall.

The princess thanked Prime Minister Jacinda Ardern for the apology, but cautioned that New Zealand’s va, (or space-between) with its Pacific neighbours would be warmer if New Zealand addressed its immigration issues.

“I am sure my community is also grateful for the gifts as an exchange of good gestures; as a beginning of a caring, closer and better relationships between your Government and future leaders and our Pacific peoples,” she said. “However… the va could be better and complete should the Government promptly respond to the immigration-related needs of the community,” she said.