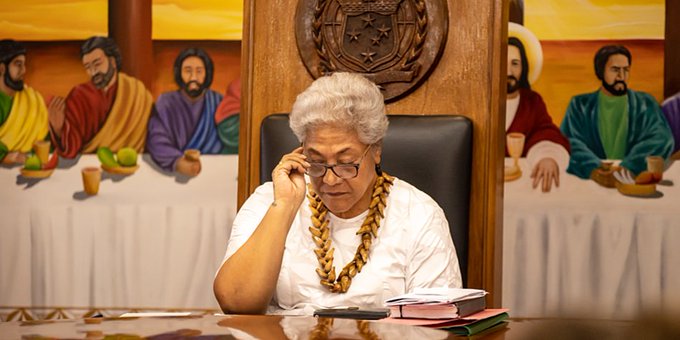 Samoan Prime Minister Fiame Naomi Mata’afa says criticism by the leader of the Human Rights Protection Party(HRPP) against the judiciary is due to his refusal to vacate office, nothing more.

He has called for a car convoy protest on Friday and a march demonstration next week to support their course, to “uphold the Constitution” which they claim has been disregarded by the judiciary in its recent rulings.

But Fa’atuatua i le Atua Samoa ua Tasi (FAST) leader, who took over the Government’s administration on Tuesday this week, said the claims by the former leader are unfounded and his refusal rejects the results of 09 April 2021 general election.

“The problem is Tuilaepa refuses to leave, nothing more,” she said. “It has dragged on for three months consuming time and money leaving the members of parliament without pay.

“I’m quite shocked about the members of parliament from that side for their patience if this is what they wanted.”

Mata’afa went on to say that the decision by the Appellate Court reconfirms the results from the general election where her party commands a majority of 26 seats.

“The claim that we were appointed by the Court is not right,” she said. “We are in Government because the country chose us. The only thing that the Court has done is to re-confirm that through the law…”

She then referred to previous claims by the HRPP leader that the Parliament cannot convene unless all the petitions and by-elections are dealt with.

But the Court has clarified that claim is inconsistent with the Constitution where Parliament has to convene within 45 days and any vacancy in office will not prevent the business of the Assembly.

“That claim [by the HRPP] was wrong and we all know that after every election Parliament goes on with its business and the Court carries out its work,” she said.

“The truth is any Government is voted in by the people, it’s not something that we made up.

“The country responded on polling day and chose 26 of us from the political party that is the Government…our goal is to deliver what the people wanted and that shouldn’t be stopped by one person or another.”

Earlier this week Tuilaepa said he conceded defeat because continuing the fight would lead to “unrest” and the party wanted to maintain peace and harmony.

However, he maintained that the decision by the Court validated an “unlawful and unconstitutional act”, claiming the new administration is illegitimately in office.

He said the Head of State is a symbol of unity of Samoa and should be protected but the decision was a clear disregard of the highest office of the land.

“[We need to] restore the respect and maintain the supremacy of parliament that is no longer there,” he said.

“The judiciary failed to discharge its duty as the protector of the Constitution and it has disregarded the powers of the Head of State that is a symbol of our country’s unity.”

In the Appellate Court’s landmark judgement, it ruled that the Head of State’s refusal to carry out the “administration of the oath” should not prevent the formation of a Legislative Assembly after the election.

“We reject the notion that the framers [of the Constitution] intended the administration of the oath of office to rest solely on the Head of State, and that is because as was eloquently submitted by Robert Lithgow QC, on behalf of the Samoa Law Society, the person who makes the oath gives his or her oath to God and not to the Head of State,” the Court of Appeal ruled.

“We consider that the act of swearing in the relevant Offices and members of the Legislative Assembly is a ceremonial role.

“It is by the Constitution a duty which is allocated to the Head of State. However if he does not attend the ceremony then someone else can carry out that ceremonial function.

“We therefore determine that where the Head of State fails or refuses to carry out his constitutional duty to swear in the incoming Government at a convening of parliament he has earlier called, and which proclamation has been endorsed by the Supreme Court, the constitutional purpose of forming a Legislative Assembly can be facilitated by someone else carrying out that ceremonial duty.”