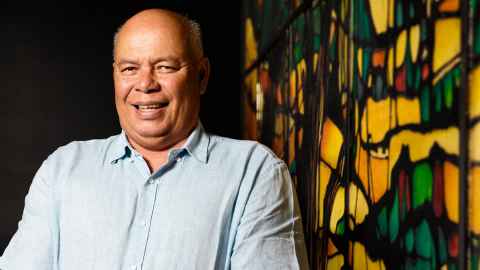 New variants of the Covid-19 virus will make it hard for countries like Cook Islands to achieve herd immunity, says a leading Pacific health expert.

Herd immunity is no guarantee, says Doctor Collin Tukuitonga from the University of Auckland.

“The problem with herd immunity, it’s not like you get to this per cent and everybody is sweet,” said Dr Tukuitonga.

“Herd immunity is not a per cent, it’s not trying to get to 80 or 90 per cent or whatever, it’s a bit more complicated than that.”

In the Cook Islands, both Aitutaki and Rarotonga has just over 90 per cent of its total eligible population fully vaccinated by Pfizer against the virus.

The rollout has reached the northern group islands as the country hopes to achieve herd immunity when the vaccination programme ends next month.

But Dr Tukuitonga said new variants of the Covid-19 virus are constantly emerging which makes it hard to know if a country has achieved herd immunity.

“People have latched on to this idea once we get to this per cent, we will all be sweet and no need to worry about anything. It’s not as straightforward as that,” he said.

Niue was celebrated in the media a week ago after they reached “herd immunity”.

But Dr Tukuitonga, while commending Niue for its vaccination effort, said this was not necessarily the case.

He said Niue may have herd immunity against “boring old original coronavirus” but maybe not against new strains like Delta variant.

Dr Tukuitonga said there’s not going to be a situation in the foreseeable future where countries can relax if they reach a certain vaccine percentage.

Cook Islands News reached out to Te Marae Ora Ministry of Health for the percentage of the eligible population fully vaccinated but have got no response.

But from previous information provided by TMO, Cook Islands News estimates more than 90 per cent of the eligible population will be fully vaccinated when the rollout is completed.

According to One World in Data, Cook Islands had given a total of 18,942 doses and 9187 people are fully vaccinated, representing only 52.6 per cent of the country’s total population.

The Pa Enua is more than 90 per cent vaccinated for its first dose, with many islands getting the whole eligible population vaccinated.

Some of the outer islands have also begun receiving their second dose.

Despite the high vaccine uptake, Prime Minister Mark Brown said the country will still take a cautious approach to its borders.

“We are taking a cautious step by step approach,” Brown said. “That has been our approach, that has allowed us to be open to New Zealand for just on two months now.

“Let’s see how that pans out.”

Brown said the country’s next step is to look at including Australia in the travel bubble.

“As we can see in New South Wales and Victoria the situation can change very quickly. We will keep a close eye on the results of the response to their outbreaks first before progressing things,” he said.

“So for now, let’s see how things develop in the rest of the world in the next few months.”

Dr Tukuitonga believes Cook Islands could open to more nations if 90 per cent of the eligible population were fully vaccinated.

However, he said if Cook Islands opened its borders to other nations, people would need to remain vigilant.

“I imagine for the Cooks and Niue, there’s no reason why they can’t open up, they can open up now,” he said.

“The point is it’s not a guarantee they won’t get the virus when they operate in a quarantine free two-way travel.”

The United Kingdom celebrated “freedom day” on July 19, which marked the end of Covid-19 restrictions despite more than 45,000 new cases and 96 deaths reported Tuesday.

The easing of restrictions included face masks no longer being compulsory in most places and the government is no longer instructing people to work from home.

On a similar vein but less extreme, the Australian government have put in a four-phase plan to return to normal.

A total of 191 million cases and 4.1 million Covid-19 deaths have been recorded worldwide since the outbreak in China in late 2019.