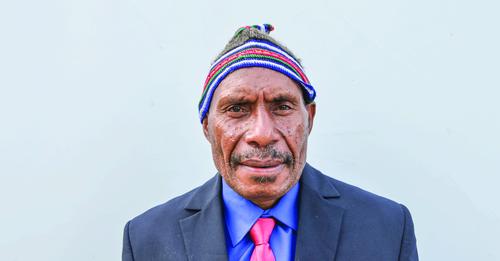 Autonomous Bougainville Government (ABG) Member for Nissan Constituency Charry Napto is among seven other passengers reported missing out in the sea since Saturday.

Napto was recently sworn in as the new ABG Health Minister after the death of ABG Atolls MP late Raymond Masono.

On board was Napto, his wife and son, a Digicel technician, a primary school teacher and the two boat operators.

One of the passengers managed to swim ashore at Pinepel Island, a smaller island 15km northwest of Nissan and was rescued by locals.

He was unconscious when rescued.

According to the report from the ABG Disaster office, the boat departed Buka Island at 11am for Nissan on Saturday, 17 July , 2021 between 2pm and 3pm.

The boat encountered a mishap approximately 150 metres from Nissan Island as revealed by the rescued passenger.

Imaka said at 1pm his office sent a broadcast message to PNGMRCC to advise ships travelling within the Solomon and Bismarck seas for possible sighting and rescue.

He said search and rescue efforts are still continuing day and night.

The Bougainville Disaster office will fly the lone survivor over the weekend.

Imaka said the survivor was be brought in from Nissan Wednesdday, flown in from the helicopter for treatment and for further interview.

He told the Post-Courier that this problem has existed for so many years.

“The ABG must address this issue seriously.”

Imaka further gave the assurance that they will do everything to complete the search and rescue operation. He said a search plane from Australia has been engaged to head to the location to do a body search and early Wednesday, a helicopter was dispatched to carry out the search.

At the local level, ABG has sent four boats out to conduct the Search & Rescue out of Buka, where a combined search and rescue will be conducted thereafter.

He added that four boats are expected to conduct Search & Rescue out of Buka, an aircraft is expected to travel out from Cairns for Nissan whilst a helicopter is expected to depart Rabaul by first light and join in the search.

“To date no further sighting by the 4 local boats that were engaged by Nissan District Administration.”

“We are also coordinating closely with the PNGMRCC, local health authority and police on the ground to monitor and coordinate using their networks, whilst keeping disaster office abreast of possible sightings,” Imaka said.

Every year the people of Nissan/Atolls have fallen victim and lost lives whilst undertaking the dangerous sea journey to and from their island homes because of no genuine or proper availability of sea transport from the leadership and governments of the day.

Low-lying nations have been demanding greater climate action at the UN...