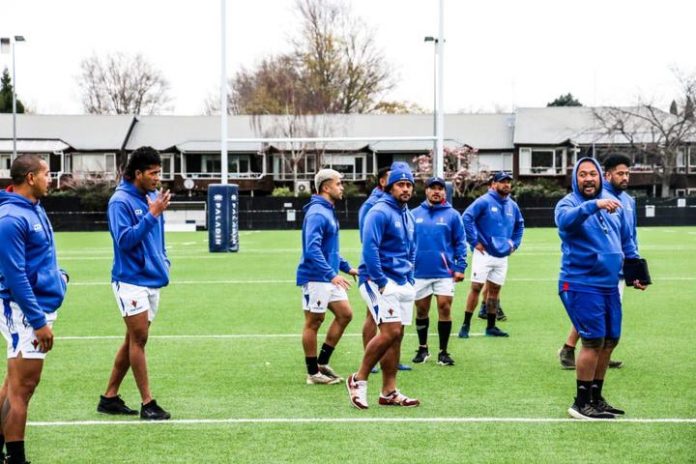 Samoa are under no illusion that their place in the 2023 Rugby World Cup is already secure.

The Manu beat Tonga 42-13 in the first of two qualifying matches, with the overall aggregate winner to seal their spot in France in two years time.

Vaovasamanaia Seilala Mapusua’s side have a 29 point buffer heading into Saturday’s second test against the ‘Ikale Tahi in Hamilton but the former Manu midfielder is adamant they won’t be taking anything for granted.

“We were pretty clear on objectives from the beginning of the campaign and we knew that it was going to take two wins to achieve our objectives, so we’ve managed to stay on course and we’re exactly where we wanted to be.”

It’s been nearly a year since Mapusua was appointed coach of the Manu and, after two competitive showings against the Māori All Blacks, the veteran of 26 tests in the blue jersey was grateful to experience his first win in charge.

“The special part about it was to see the players be rewarded for all the hard work that they’ve put in, not just over the last few weeks but to even get to this point,” he said.

“I see it as a massive win for Samoan rugby as a whole, in terms of the organisation as well as the players being able to get on the field and play test matches. It was a special moment for myself and real proud of the boys.”

Nine Samoan players made their test debut at the weekend and Mapusua said there was a healthy competition for place in the squad.

“It’s been real tough for myself and the coaches to select the team but that’s a positive thing. We’ll be looking to first of all try and win this game and that’s the importance of this game.

“If we manage to get a few more test caps on the way that’s a bonus but we’re taking this game like every other test match and maybe a little bit more because of it’s importance.”

One man who will be particularly keen to run out at FMG Stadium is veteran flanker Jack Lam, who was born in Hamilton and recently returned home after two seasons playing in Japan.

The 33 year-old is out of contract and admitted Saturday’s test could be his last game of rugby before hanging up his boots for good.

“I’d happily hang up the boots after that, if that was the case.”

Lam confessed he “lost the spark and enjoyment of playing rugby” during the Covid-19 pandemic.

Being away from his partner and three children in Japan made the situation even tougher but the former Hurricanes and Bristol Bears loose forward is grateful to be back in the Manu Samoa environment.

“It’s definitely woken me up again to why I started playing rugby in the first place and even more special because I get to represent my home country of Samoa.”

The former captain is in line to win his 40th – and possibly final – test cap this weekend, having played his first three alongside his now coach back in 2013.

“To be coached by Maps is pretty special as well. He’s done such awesome work in laying down the foundations of this campaign. We talked about qualifying…right from day one and that’s never been out of our sights.

“That’s been the main objective of our whole campaign was getting to this point and being half the way there it’s been pretty exciting and probably one of my more memorable tours to look back on once I hang up the boots.”

The loser of the Oceania playoff series will get another shot at qualifying for the World Cup, via matches against the Cook Islands and the winner of the Asia Rugby Championship.

But with one dominant performance against the ‘Ikale Tahi already behind them, Samoa are determined to deliver the knockout blow this weekend and secure their ticket to France.

“We’ve given ourselves another opportunity to take another step towards qualification for Rugby World Cup, so that’s probably been one of the more pleasing things,” explained Mapusua.

“Now we can really look forward to and really challenge ourselves and really build on all the good work that’s been done the last three weeks and finish strongly.”.