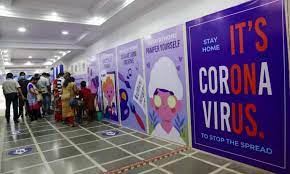 The Delta variant of Covid-19, first identified in India, has been detected in 74 countries and continues to spread rapidly amid fears that it is poised to become the dominant strain worldwide.

Outbreaks of the Delta variant have been confirmed in China, the U.S, Africa, Scandinavia and Pacific rim countries. Scientists report that it appears to be more transmissible, as well as to cause more serious illness.

In the U.S, according to the former Food and Drug Administration (FDA) commissioner Scott Gottlieb, cases of the Delta variant are doubling roughly every two weeks and account for 10% of all new cases, while in the UK it accounts for more than 90% of new cases.

While health authorities around the world are collecting and sharing data on the spread of the new variant, the fear is that in countries in the developing world with less robust monitoring systems, the Delta variant may already have spread much further than has been reported.

Ashish Jha, the dean of the Brown University’s school of public health in the U.S, last week called the Delta variant “the most contagious variant we’ve seen so far”.

As in introductions of previous strains of coronavirus during the pandemic, the Delta variant is proving to be pernicious and effective in avoiding border controls and quarantine measures.

As with previous variants, Delta is proving to be effective in avoiding existing border and quarantine ­measures. In Australia, cases have been seen in Melbourne despite strict controls.

The World Health Organisation designated Delta as a variant of interest in April and a variant of concern on 11 May. It appears to cause more severe symptoms, according to evidence seen from India and elsewhere, including stomach pain, nausea, vomiting, loss of appetite, hearing loss and joint pain.

The evidence from Guangzhou in China, in particular, has been concerning. There, health officials have reported 12% of patients becoming severely or critically ill within three to four days of the onset of symptoms – up to four times higher than in previous outbreaks – and sick individuals infecting more people.

Research in China, mirroring in broad terms that in the UK where the Delta variant has become dominant, has also found the strain appears to be somewhat more resistant to vaccines, in particular a single dose.

All of which has prompted renewed debate over how governments should be responding to the Delta variant. Amid the difficulties in preventing the spread of the variant globally, different countries are attempting different approaches to try to control its spread.

Perhaps most radical, as was also seen in the initial outbreak of coronavirus in Wuhan, has been China’s approach after its first confirmed case of the Delta variant, in a 75-year-old woman in Liwan, a district of the southern city of Guangzhou, after visiting a restaurant.

It prompted new measures including driverless shuttle vehicles delivering food and supplies to tens of thousands of people in districts that are under a strict lockdown, while a fleet of 60 drones ensures people stay indoors.

Indonesia said on Monday it expected that a new wave of coronavirus infections would peak in early July, as the Delta variant becomes more dominant in some areas and with the occupancy of hospitals in Jakarta hitting 75%.

Caseloads in India have been dropping in recent weeks, and the UK in particular is being watched closely as the canary in the coalmine by countries whose vaccination programmes are already well advanced – such as the U.S and Israel – who are keen to understand what the advent of the Delta variant means for hospitalisations and deaths.

Speaking on CBS’s Face the Nation, Gottlieb, who is on the board of Pfizer and has written a book on the pandemic, said it was inevitable that the Delta variant would become dominant in the U.S.

“Look, and it’s going to continue to spread. It’s concerning. It appears to be more transmissible … So this is more contagious. It appears that people who get this virus have higher viral loads and they have those viral loads for longer periods of time,” he said. “Right now in the United States, it’s about 10% of infections. It’s doubling every two weeks. So it’s probably going to become the dominant strain here in the United States.”

Gottlieb’s comments echoed those of Anthony Fauci, the director of the National Institute of Allergy and Infectious Diseases, who a week earlier warned that the U.S could not allow the Delta variant to become dominant as had happened in the UK.

“Clearly now its transmissibility appears to be greater than the wild type,” Fauci said. “This is a situation, the way it was in England where they had a B.1.1.7 [Alpha variant] dominant, and then the [Delta variant] took over. We cannot let that happen in the United States.”

For now, however, the US – where 43.6% of adults are fully vaccinated – is sticking to its policy of protecting against the variant through encouraging vaccination, with little pressure for renewed lockdowns or similar restrictions.

While concern is mounting in countries with well-developed health systems and vaccine programmes, most worrying is the potential impact of the Delta variant in poorer countries.

‘The fear of this vaccine is real’: how Papua New Guinea’s...