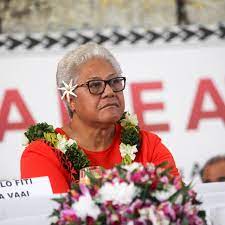 A hearing on an application brought by the Samoa Attorney General to stop the ad-hoc swearing-in of a new Government from taking legal effect will begin next Monday.

The Fa’atuatua ile Atua Samoa ua Tasi (FAST) party held an improvised swearing-in ceremony on the lawns of Parliament on 24 May after finding itself locked out of the premises.

Leader Fiame Naomi Mataafa, a full Cabinet and all 26 MPs aligned to the party were sworn in, the day after the Supreme Court overruled an attempt by the Head of State to retract orders that the Parliament meet. The grounds of that Supreme Court ruling – and FAST’s for holding its ceremony – were that it was legally necessary to meet a constitutional clause requiring Parliament to sit within 45 days of an election being held.

The Human Rights Protection Party (HRPP), which boycotted the sitting, has argued it was not valid because it was not attended by the Head of State or other dignitaries prescribed in the constitution.

The request from the Attorney General would stop Samoa from switching to a FAST-led Government; it will be opposed by all 26 of the party’s duly elected candidates.

The Attorney-General, Savalenoa Mareva Betham-Savalenoa, will seek orders that declare the claimed swearing-in ceremony from FAST as unconstitutional and unlawful.

Taulapapa, a long-serving Attorney-General, was part of the swearing-in ceremony after she was voted by those assembled to preside over proceedings after the Clerk of the Legislative Assembly, Tiatia Graeme Tualaulelei, said he was restrained from partaking in the ceremony.

The respondents are accused of assuming the roles of the Constitutional authorities of the Head of State, the Speaker, Clerk of the Legislative Assembly, the registrar of the Court, Cabinet Secretary and the Attorney General.

The Attorney-General claims that the ad-hoc ceremony on 24 May that was forced to was invalidly officiated.

Her submission argues the first respondents have no legal authority and are not the authorities responsible for and identified under the Constitution to officiate the official swearing-in of the members.

The Attorney-General has further claimed that as the event took place outside the Legislative Assembly at Mulinuu around 5 pm it was unconstitutional and unlawful.

By contrast, the FAST party’s case maintains that their action on that day was in compliance with the court order handed down the day before to convene Parliament within 45 days of an election.

Out of necessity, the FAST party says that they needed to act in order to prevent a violation of the supreme law of the land.

The FAST party had claimed that failure to convene Parliament would have resulted in the Head of State calling for fresh elections.

The party is relying on the principle of necessity as its defence for convening without the presence of the officials who are constitutionally mandated with carrying out the ceremony.

The Head of State, Tuimalealiifano Va’aletoa Sualauvi II, initially signed a proclamation last month which called for Parliament to convene on 24 May 2021.

He later cancelled that announcement on the Saturday night prior to Parliament’s scheduled sitting. He provided no written reasons for the late-night move but said they would be made known in due course; he is yet to elaborate on the reasons.

The following day the Supreme Court met “in-chambers” to hear an ex parte application from FAST and others asking for direction and orders.

The Attorney General was served on a “pickwick” basis where the panel of Supreme Court Justices made orders.

Those orders included a permanent order on the proclamation from the Head of State on Thursday to convene Parliament on Monday and was made in accordance with Article 52 of the Constitution. Article 52 relates to meetings of the Legislative Assembly and the 45-day rule.

An interim court order was made stating that any overturning of the proclamation dated 20 May 2021 is inconsistent with the declaration of a judgment from the court and Article 52.

The non-compliance with those orders to convene Parliament are the subject of other legal challenges mounted by FAST including the Prime Minister, the Attorney-General, the Speaker of the former Parliament, Leaupepe Toleafoa Faafisi, and Tiatia who were cited for allegedly being in contempt of court.

The Chief Justice has adjourned the matter for mention on 28 June.