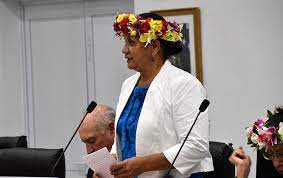 The man who has the historical case is a Cook Islander who works for an Australian company based in Egypt.

He has been charged with making a false declaration on a Cook Islands travel document after failing to declare the historical case.

Two weeks after the man’s arrival it became known the man previously had the virus from a positive Te Marae Ora Covid test on Friday.

The man was arrested on Saturday after being referred to by Te Marae Ora Ministry of Health. He is expected to appear in Court tomorrow.

During Parliament’s question time, both the Titikaveka Member of Parliament, Selina Napa and the Leader of the Opposition, Tina Browne asked the government how the problem was being addressed.

Browne asked if there was a way for the country not to rely solely on the information from the declaration forms.

In his reply, Prime Minister Brown said: “It’s very difficult to tell a person not to lie, we don’t control a person’s mind but we can control the consequences of lying.

“As we’ve read in the newspaper, this matter is now before the courts and this man will be charged.”

“One additional step that will now take place is that those people will now be questioned by health professionals whether their declaration is true and honest.”

Brown later told Cook Islands News: “Now they (travellers) will be asked the question, have they filled out their forms correctly and honestly, is that their name on the form.”

He said the consequences of making false declarations on travel documents are already in law.

“It’s in the hands of the authorities and the courts now to see what appropriate action should be taken,” said Brown.

Meanwhile, as of Tuesday evening, 618 Rarotonga residents had received their second dose of the Pfizer vaccine at Rarotonga hospital

The second round of the Covid-19 Pfizer vaccine roll-out for Rarotonga began Tuesday with a steady number of residents showing up to the Nikao Social Centre before being transported up to Rarotonga Hospital.

During the phase one roll-out, residents were welcomed and encouraged to show up at any time to receive their first dose of the vaccine. This time, vaccinations will be done strictly by appointment as there is a set period of time between the first dose and the second dose that must be abided by.

People are required to bring with them their vaccination card proving they were receiving their second dose of the vaccine on the correct date.

Rarotonga resident Ross Warrick was amongst the first to receive his second dose of the vaccine on Tuesday. He was glad to have both doses done and over with.

“The second dose definitely felt better than the first. This time I hardly felt the needle at all and it was just as quick and efficient as the first time,” Warrick said upon arriving back from the hospital to continue on with his day.

A husband and wife, who wished not to be named, were amongst the first of the country’s eligible population to receive the first dose of the vaccine last month.

They admitted they were feeling somewhat apprehensive about the side effects they may get from their second dose, but were basing their confidence in the good work done by Te Marae Ora to provide the public with as much information as possible.

Oirua Tini from Te Marae Ora said: “We are very much looking forward to the second and final roll-out of the vaccine in the next few weeks. We don’t want 50 per cent, we want 100 per cent. Those who are eligible to come back and complete their vaccination process, we encourage you to do so.”

Rouruina Tararo, one of the four mini bus drivers transporting people to and from the social centre and the hospital, says he has enjoyed the opportunity to serve his country this way.

“During the first roll-out we would do four trips an hour, starting at 6:30am and finishing at 7pm. With this round being strictly appointment only, hopefully the work day will be a little less hectic as this time you cannot just show up whenever you like.

Still, at the end of the day we are just wanting to get everyone their second dose safely and securely,” Tararo shared.

AUSMAT officials in Kiribati to help contain spread of COVID-19