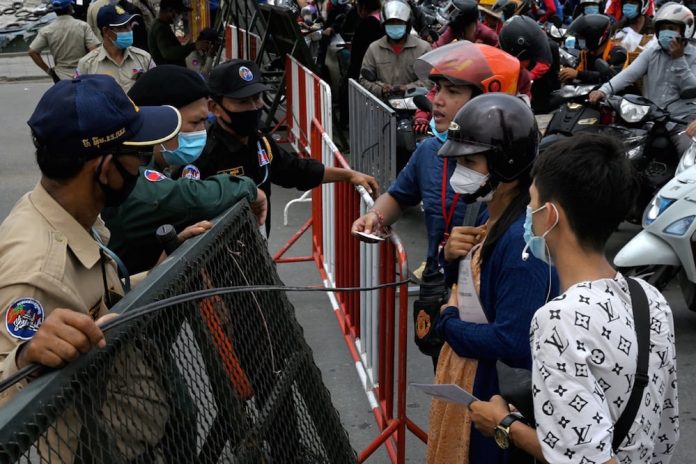 The authorities’ actions are reinforcing the already widespread atmosphere of self-censorship, preventing participation in governance and public affairs, and extinguishing an important safeguard for government accountability.

We, the undersigned international human rights organisations, call on the Cambodian government to immediately stop its assault on freedom of expression in the context of the COVID-19 pandemic. In recent months, the government has warned against public criticism of its actions, prevented independent journalists from reporting on the pandemic, prosecuted individuals for criticising the inoculation campaign, and threatened journalists and social media users with legal actions on the spurious grounds of provoking “turmoil in society.”

While Cambodia was spared from high numbers of severe COVID-19 cases in 2020, beginning in February 2021 there has been a spike in cases to which the government responded with disproportionate and unnecessary measures in violation of Cambodia’s international human rights obligations. This includes a campaign against freedom of expression that further constricts media freedom and promotes fear and self-censorship in the country. These measures serve to undermine, not advance, efforts to stop the spread of COVID-19.

The Cambodian authorities placed a de facto ban on independent reporting in Phnom Penh’s red zones – areas deemed to be high risk for COVID-19 transmission. On 3 May 2021, the Ministry of Information announced that only state media or journalists invited by the government would be permitted to report from red zones. The next day, the Ministry of Information issued a letter warning journalists not to disseminate information that could “provoke turmoil in society” and threatening legal action against those who disobey. The letter followed viral livestream footage from multiple Facebook news outlets of long queues of COVID-19 patients outside government treatment centres.

The government’s campaign to silence critical commentary has extended beyond journalists to ordinary people, in a manner incompatible with international human rights standards.

In a press release dated 1 May 2021, the Government Spokesperson Unit demanded the immediate cessation of social media posts intended to “provoke and create chaos” in the context of the COVID-19 pandemic, referring to such posts as “acts of attack” that must be punished. The press release concluded by praising the efforts of government officials to curb the spread of COVID-19 but did not provide any legal justification for imposing these possible restrictions on the right to freedom of expression.

On 30 April 2021, Kandal provincial authorities warned farmers in Sa’ang district not to post images of vegetables spoiling in their fields due to the closure of markets, stating that such communications are bad for morale. One farmer, Tai Song, was pressured by the provincial authorities to sign a document agreeing not to post such content again after he shared a photo on Facebook showing his vegetables rotting and stating that he had to clear and throw away his crops.

The Cambodian authorities have arrested dozens of individuals for expressing critical opinions about the government’s COVID-19 response, including at least six individuals for their criticism of the government’s vaccination campaign. One Chinese journalist, Shen Kaidong, was subsequently deported for publishing a story deemed ‘fake news’ in which multiple Chinese nationals reported receiving a text offering them the Sinopharm vaccine for a service fee.

Authorities have also prosecuted at least three individuals – Korng Sambath, Nov Kloem, and Pann Sophy – for posting TikTok videos criticising the use of Chinese-made vaccines under the new, overly broad and vague Law on Measures to Prevent the Spread of COVID-19 and other Serious, Dangerous and Contagious Diseases (the COVID-19 Law).

These actions are consistent with the government’s systematic and relentless crackdown on freedom of expression and information spanning far beyond the beginning of the COVID-19 pandemic. This latest surge contributes to the government’s broader efforts to silence all critical voices in Cambodia.

The right to freedom of expression is protected by Article 19 of the International Covenant on Civil and Political Rights, to which Cambodia acceded in 1992, and by Article 41 of Cambodia’s Constitution.

Protecting public health is the grounds on which the government is purporting to restrict freedom of expression. While there is a legitimate need to counter the spread of misinformation online to protect public health during a pandemic, this objective must be provided by a clear and accessible law and pursued using the least intrusive means, rather than unnecessary and disproportionate measures like unwarranted arrests, detentions, and criminal prosecutions.

In its General Comment 34, the UN Human Rights Committee emphasised the essential role of the media in informing the public and stated that “in circumstances of public debate concerning public figures … the value placed [on] uninhibited expression is particularly high.” A 2017 Joint Declaration of four independent experts on freedom of expression stressed that “general prohibitions on the dissemination of information based on vague and ambiguous ideas” are incompatible with international human rights standards.

The UN Committee on Economic, Social and Cultural Rights emphasised in General Comment 14 that the protection of freedom of expression is a key component of the right to health – enshrined in Article 12 of the International Covenant on Economic, Social and Cultural Rights – enabling vital information collected by the public and journalists to reach policymakers. We therefore strongly condemn the Cambodian government’s efforts to inhibit the free flow of information relevant to the pandemic. Such actions will negatively impact the quality and reliability of news reporting and undermine the government’s own ability to respond to COVID-19.

Open dialogue and robust investigative journalism are critical during times of crisis, including public health emergencies. The Special Rapporteur on the right to health has emphasised the crucial role of the media in ensuring accountability in health systems. During a pandemic, free and independent media can help identify viral hotspots or outbreaks, monitor national and international responses, and promote transparency and accountability in the delivery of necessary public health services.

The Cambodian government’s clampdown on free speech is having a chilling effect on the exercise of freedom of expression in Cambodia. The authorities’ actions are reinforcing the already widespread atmosphere of self-censorship, preventing participation in governance and public affairs, and extinguishing an important safeguard for government accountability.

We therefore call on the Cambodian government to end the harassment of independent journalists reporting on COVID-19 and individuals who voice critical opinions or fears about the pandemic on social media platforms and to take steps to ensure a free, independent, and diverse media environment. We urge the Cambodian authorities to substantially amend or repeal the new COVID-19 Law and other non-human rights compliant legislation that criminalise or unduly restrict freedom of expression and information. The Cambodian government should uphold the right to freedom of expression, including the freedom to seek, receive and impart information instead of using a public health crisis as an excuse to extinguish dissent.