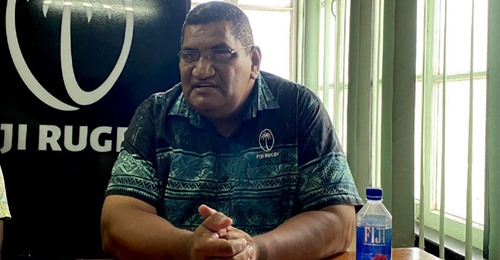 Fiji Rugby will have heads turning on and off the field of play this year with the Pacific rugby powerhouse partnering with global sporting giant Nike as its official team and training kit supplier.

The four-year deal will see the iconic Nike Swoosh feature on the Men’s and Women’s training and playing kits for both 15’s and 7’s national representative teams until the end of the 2024 international rugby season.

The flair and exhilarating play the Fijian’s are renowned for on the field of play will be replicated off it, with the range set to combine traditional Masi art that celebrates the history and tradition of Fiji Rugby with Nike’s eye-catching New Wave design.

At a press conference at Rugby House in Suva today, FRU CEO John O’Connor expressed his delight that FRU had been able to partner with such an iconic global brand for the next four years. He thanked and acknowledged the Almighty for this great blessing to Fiji Rugby.

“Nike is synonymous with greatness and it will give me and all the millions of Fijian rugby fans around the world great pride to see the famous Swoosh on our jersey the next time our Men’s and Women’s teams run onto the field of play.” O’Connor said.

O’Connor foreshadowed that the 7’s and XV’s playing jerseys will be unveiled in coming weeks, as the 7’s teams prepare for the Oceania 7’s in late June, and the Flying Fijians for their tests against the All Blacks in July.

General Manager Commercial Brian Thorburn said “Nike is not only a massive global brand and incredible apparel powerhouse, but they have a deep commitment to innovation and product development, and our Fiji national teams will benefit from Nike’s continuous product development and performance enhancements.”

Their mission is to bring inspiration and innovation to very athlete in the world, and they’ll certainly be doing that for Fiji Rugby teams and our players”

Thorburn also thanked FRU’s Licensing agent, Velocity Brand Management for their work in growing the FRU brand and licensing program over the last four years, and in particular their efforts in bringing Nike on board with the FRU.

The 7’s playing range will be worn during the upcoming Oceania 7’s tournament to be played in Townsville in late June, with the designs set to be unveiled in mid-June once the 7’s teams emerge from Quarantine. The designs reflect the incredible skill, flair, passion and success that the Men’s and Women’s team have enjoyed across international rugby tournaments and the Olympic Games.

The 7’s playing range design will feature pyramids, triangular shapes and silhouettes of the Tabua (whale’s tooth) as well as a striking turquoise blue alternate strip that honours the tranquillity of the island nation.

The XV’s playing jersey will debut in the July tests against the All Blacks. Also set to be unveiled in early July, the 15’s range will feature traditional white and black colouring with Masi design elements including Triangular designs, rugby balls, the Ula (a traditional Fijian weapon) and 15 squares that celebrates the history, traditions and fighting spirit of the “Flying Fijians” and “Fijianas”.

O’Connor also announced that Fiji’s biggest retailer, Tappoo will continue to exclusively sell the official training and playing kits, and expects them to be very popular when available in coming weeks and months

Tappoo Executive Director, Harnish Tappoo said “Tappoo have been Nike’s Retail Partner in Fiji for over 25 years. We have also had a long association in selling Fiji Rugby products in Fiji. Hence it is especially pleasing to see Nike Partnering with Fiji Rugby. We see this as a glove-fit for our stores. Fiji Rugby is not only popular with the locals but it is usually everyone’s 2nd Favourite team internationally. We look forward to selling the Nike Fiji Rugby range to our local fans as well as Tourists that visit our shores, once Borders open”

“Nike is the trusted kit supplier to some of the most iconic sporting teams, leagues and players on the planet and I am thrilled that Fiji Rugby is now part of that family” Fiji Rugby CEO Mr John O’Connor said.

“Rugby is the lifeblood of Fijian people and this is an exciting partnership not just for Fiji Rugby but for the entire nation” O’Connor said.