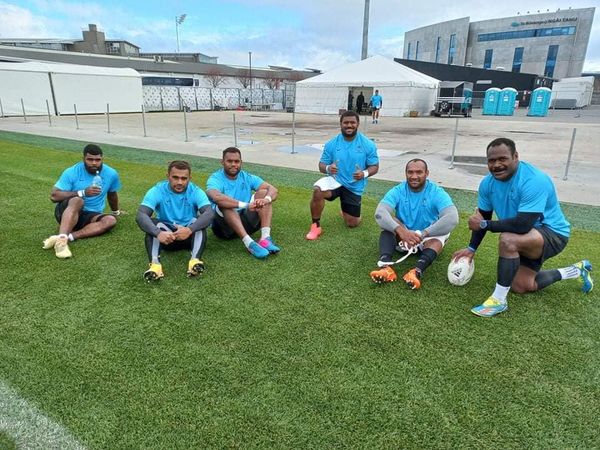 The All Blacks are expecting a much sterner test when they face Fiji in Dunedin, despite having waltzed to a 102-0 victory over Tonga at Mt Smart Stadium on Saturday.

In one of the most one-sided tests in New Zealand history, the All Blacks ran in 16 unanswered tries against a severely understrength Tonga – who were missing a number of first-string players due to unavailability overseas.

All up, Tonga’s matchday 23 included 13 previously uncapped players – some of whom had come from New Zealand club rugby to face the All Blacks.

But Fiji will have no such issues, with arguably the only star missing being former NRL winger Semi Radradra.

What’s more, Fiji is coached by a familiar face – Kiwi Vern Cotter – who’ll have an idea of what to expect from Ian Foster’s All Blacks.

And speaking on Sunday, All Blacks assistant coach Scott McLeod made it clear that his side is aware of the step-up in quality heading into this week’s test at Forsyth Barr Stadium.

“They’ve got a number of players from Europe that are very good players. We’ve been making the team very aware of that.

“They run just as hard as the Tongan boys, so our collision area in defence will have to be up another level, I think.

“We’re expecting them to be highly organised, [with] a new coaching set-up for them, and playing them under the roof, they’ll want to throw the ball around as well.”

McLeod adds Fiji will face the All Blacks with a more physical gameplan, boasting 14 players playing out of France, five from England and Scotland, three from Australia and two from New Zealand.

“From one to 23, [Fiji] can carry the ball – carry heavy ball. They’ll just want to run straight through you and over you.

“They’re actually quite smart with their set-piece play. They’ve got a new coaching set-up that are smart coaches.

“They haven’t played a lot, so [we] haven’t been able to see what they will bring. But knowing the strength of the people, the coaches will be smart in the way they use them.

“And from what I’ve seen out of the European players, it’s pretty direct and hard.”

The All Blacks on the other hand could be without flanker Dalton Papalii, with McLeod confirming a calf-strain 23-year-old. But in better news, the duo of Ardie Savea and Shannon Frizell could be shaping towards a playing return.

“Dalton strained [his] calf, [he] came off last night as a precaution. Length or term [we’re] not too sure, we just have to see how he unfolds over the next couple of days.

“We have to wait until Tuesday, they’re [Savea and Frizell] both in a similar boat, in terms of their availability, we just have to test them a little bit more. It’s not that they’re available as of today,” he said.