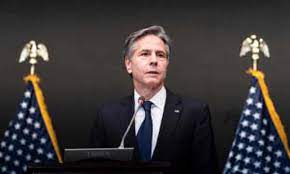 The U.S secretary of state has warned leaders of Pacific countries about “threats to the rules-based international order” and “economic coercion”, in what appears to be a veiled swipe at China’s growing influence in the region.

Antony Blinken was addressing leaders and their delegates from 11 Pacific countries and territories including Fiji, Solomon Islands, Cook Islands, Federated States of Micronesia, French Polynesia, Palau and Marshall Islands as part of the Pacific Islands Conference of Leaders, which is held in Hawaii.

Blinken reiterated U.S support for Pacific island nations as they face the “shared challenges that we have to confront together”, including Covid-19 and the climate crisis. He also appeared to make a criticism of Australia’s action on the climate crisis, calling for “all countries, particularly the biggest emitters, to swiftly and dramatically reduce emissions.”

But the main focus of his televised address was China’s growing influence in the region.

“Economic coercion across the region is on the rise. The U.S is all for more development and investment in the islands, but that investment should adhere to international standards for environmentally and socially sustainable development and should be pursued transparently, with public consultation,” he said. “And every country, no matter its size, should always be able to make choices without fear of retribution.”

Jonathan Pryke, director of the Lowy Institute’s Pacific Islands Program in Australia, said it was “pretty obvious” who Blinken had in his sights during the speech.

“There’s only one country that is engaging in the Pacific in a big way in the past few decades that isn’t part of the traditional club and that is China,” he said. “It’s very thinly veiled who he is talking about when he’s talking about economic coercion.”

China has deepened its connections with governments across the Pacific in the last few decades, amid a soft power push that sees it rivalling the influence of Australia.

China has engaged in significant lending to Pacific countries, as well as paying for massive infrastructure projects. A report in 2018 found that Papua New Guinea, the largest country in the Pacific Islands with a population of roughly nine million, had been accepting unaffordable Chinese loans, and in 2019, Papua New Guinea asked China to refinance its entire government debt, a request that marked a “significant shift” in regional politics, according to Pacific analysts.

Pryke also said that it was “a bit rich” for the US to be warning Pacific nations about China’s influence given the country’s almost nonexistent diplomatic presence in many Pacific countries.

“They really have such a marginal footprint, it’s one thing to say all these things about ‘be careful, we need to stop this malign influence in your countries’, but what are the alternatives you’re providing?”

Blinken’s address was part of the Pacific Islands Conference of Leaders, and was attended by leaders or delegates from 11 countries or territories, but representatives from a significant number of countries, including Papua New Guinea, Tonga, Vanuatu, Kiribati, Tuvalu and Samoa did not attend.

By contrast, last week, China held a virtual China-Pacific island discussion which was attended by senior representatives from the governments of most countries, including the prime ministers of Papua New Guinea, Solomon Islands, Tonga, Vanuatu, the president of the Federated States of Micronesia, the premier of Niue and Fiji’s defence minister.

In his address, Blinken also affirmed the United States’ commitment to taking action on the climate crisis, which he said posed a “threat that is existential for the islands”.

“Countries must make and beat ambitious commitments. The U.S is leading by example on this front. Biden has set out targets to reduce emissions by at least half by 2030,” Blinken said.

Dr Wesley Morgan, research fellow at Griffith Asia Institute, said it was “entirely possible” that Blinken had Canberra in mind when he made these comments.

“They are also taking a swipe at Australia and want to see action on climate,” he said.

Blinken says U.S has a ‘long-term future’ in the Pacific Islands