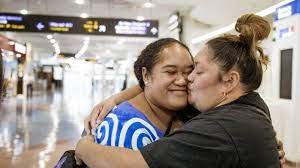 There were tears, singing and applause as the first travel-bubble flight from New Zealand landed in Rarotonga on Tuesday.

Passengers on board Air New Zealand flight NZ940 didn’t let the bad weather in the Cook Islands deter their excitement as they broke into applause when the pilot announced the arrival on the tarmac.

It was the first time visitors were allowed in Cook Islands in 15 months, since the coronavirus pandemic which forced border closures.Travellers were up early on Tuesday morning to catch the first quarantine free flight to Rarotonga.

There were tears, singing and applause as the first travel-bubble flight from New Zealand landed in Rarotonga on Tuesday.

Passengers on board Air New Zealand flight NZ940 didn’t let the bad weather in the Cook Islands deter their excitement as they broke into applause when the pilot announced the arrival on the tarmac.

It was the first time visitors were allowed in Cook Islands in 15 months, since the coronavirus pandemic which forced border closures.

At Rarotonga Airport, passengers were greeted with applause and cheers as they disembarked from the aircraft, from locals who had gathered.

But the applause and excitement was also for the Pfizer Covid-19 vaccine, which arrived on the same flight.

Cook Islands Prime Minister, Mark Brown, was beaming from ear to ear as he fronted New Zealand and local media at a conference room at the airport.

He was getting ready to board the same Air NZ plane back to Auckland to head to his daughter’s graduation in
Wellington.

“This is probably the busiest week for Rarotonga, with the visitors and with te roll-out of our vaccination,” he said.

He said it had been a 14-month wait, but a necessary one as protecting lives was more important than the economy.

“As I have said before, the hard work is not over It will take time for our tourism industry to fully restart itself again after 14 months in hibernation, and we will all have to readjust to what is yet another new normal in this time of Covid-19.

“Even now, as we set out on our road to economic recovery, we must also continue to be mindful of the fact that Covid-19 is still out there, beyond our borders.”

The Cook Islands is one of only 14 countries in the world, and nine in the Pacific, to remain virus-free.

Speaking at Auckland Airport before take-off on Tuesday, Moeroa Pamela Pakari, from Melbourne, said she was excited to see her grandmother in the Cook Islands after seven years.

The 20-year-old was among passengers at gate 8, which was filled with cheerful island music and dancing from Anuanua Performing Arts.

Passengers were served mocktails and Cook Island donuts as they waited to board.

Pakari came to Auckand to see her grandfather, which coincided with the announcement of the two-way travel bubble.

“I decided to stay longer in Auckland so I could travel on to Rarotonga,” Pakari said.

She will spend a few days in Rarotonga before flying to Atiu where her grandmother lives.

“I’m very excited, I haven’t seen her for so long. It’s going to be an amazing reunion.”

Tekura Ngariki was going back home after coming to New Zealand for a medical visit.

She said she was worried about coronavirus getting on the island.

“I’m very happy that travel has opened but hope that visitors realise the responsibility they have when they come over,” Ngakiri said.

“We come here and comply by all of New Zealand’s rules, we hope they give us the same respect.”

For Kevin Scott, the trip back to Cook Islands was a sombre one. He was bringing his wife’s ashes to Rarotonga, back home where she wanted to rest.

Scott and Teau, who first met on a dance floor in Wellington, had been married for 47 years when she died from a brain disease in Auckland last June.

They had lived on Rarotonga for 15 years and it’s been home for them since.

Scott said he was happy to be returning home, with his wife, for the last time.

“She wanted to come back so I’m respecting her wishes,” Scott said. “She had been sick for a while. We came to Auckland in September 2019 and then she had to be put in a home.
“I want to build a gazebo outside our home and put her in our garden. She loved being outside.”

The travel bubble is an extension to a one-way travel bubble which began in January, allowing Cook Islanders to enter New Zealand without the mandatory 14-day quarantine.

The two-way travel bubble will allow visitors to move freely between both countries.

“It’s no surprise that Kiwis are booking in a much-needed break, especially as the temperature drops at home. In 2019 we saw almost 110,000 New Zealanders head to Rarotonga, so it’s great to see strong demand for flights following the bubble announcement,” she said.

“Initially, we’ll be offering two flights a week on Tuesday and Saturday. This will ramp up to daily in July to ensure that we can help as many Kiwis as possible escape for some well-deserved R&R.”

People who have been in New Zealand for a full 14 days prior to departing for the Cook Islands are eligible to travel quarantine-free.

Travellers must not have tested positive for Covid-19 in the 14 days prior to departure or be awaiting results.

If they have tested positive, written advice from a health practitioner confirming they are no longer infectious must be presented.

Normal immigration rules apply for travel to the Cook Islands. Travellers are allowed to stay for up to 31 days and must have evidence of a return ticket.

Temporary visa holders in New Zealand can travel to the Cooks so long as they meet all immigration requirements and can return to New Zealand.

In the event of any Covid infections in New Zealand, there are three phases of the bubble: Continue, pause and suspend.

In the ‘continue’ phase, quarantine-free travel operates as planned as there is a low risk of transmission.

If cases emerge with an unknown source but a likely link to the border, short-term lockdowns may be imposed in affected areas, and flights to and from the Cooks will be paused.

Travellers may be asked to get a pre-departure test, to self-isolate, or even go into managed isolation on arrival. From here, the situation may quickly escalate to the next phase, suspension.

Flights will be suspended if there’s a confirmed case with an unknown source, prompting a nationwide lockdown in either country.

Flights will be stopped for an extended period, but people needing to return to New Zealand or the Cook Islands will be managed to minimise the risk of spread.

Unlike the Australian arrangement, travellers flying out of New Zealand under the bubble won’t be stranded. Ardern has previously explained they would be helped home.