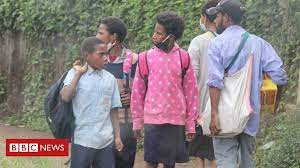 As Australia’s nearest neighbour battles with what experts say is an exponential surge in coronavirus cases, fears of unexplained deaths have had sinister consequences.

Sanguma – a local word that refers to the occult – is common across the Pacific. It is a mostly benign tradition, but with a darker side.

“A couple of weeks ago, one of the health workers in a rural facility died of Covid and his wife and daughter were tortured because of a belief in sorcery, and later they were confirmed with Covid as well,” explained Justine McMahon, PNG country director for Care International, a development charity. “Sorcery certainly plays into some of the attitudes that people have.”

Black magic is entangled in a swirl of conspiracies, suspicions and false rumours that are compounding one of PNG’s greatest public health emergencies.

“Misinformation is spreading faster than the virus. There is a huge degree of scepticism towards vaccinations,” warned Jonathan Pryke, the director of the Pacific Islands Programme at the Lowy Institute, a Sydney-based think-tank. “Social media is really fuelling the misinformation and the mistrust of the vaccine.

Supplies of the AstraZeneca drug delivered by the global Covax programme are expected to be administered within days.

There have been just under 11,000 Covid-19 infections and 107 deaths in PNG, according to Johns Hopkins University’s coronavirus resource centre. Seasoned observers, though, doubt this is an accurate reflection of the crisis because of low levels of testing, infected patients who aren’t seeking treatment, and fatalities not being identified with the virus.

“Covid has been growing exponentially since Christmas. It’s extremely bad,” Pryke told the BBC. “The health system is so stretched to breaking point that it really can’t handle the shock. The official statistics dramatically underestimate just how severe the challenge is.

“The only thing really insulating PNG from this crisis is that they have a very young population. So a lot of people are getting sick and recovering.”

Justine McMahon is based in Goroka, the capital of the Eastern Highlands Province. She sees worrying signs of complacency, even among teachers and medical workers.

“Many of those people are also propagating misinformation. People actually have to take this seriously,” she said. “Few people are following [public health] precautions. There is a lot of ambivalence. There is a lot of really doubting whether the virus affects the people, so that is a real struggle.”

When Professor William Pomat, director at the Institute for Medical Research in Papua New Guinea, developed chest pains, respiratory problems and rising panic, he recognised these as the signs of a Covid-19 infection.

“When you are feeling out of breath or your chest is tightening , you are thinking: am I going to be the next statistic? So all that is scary,” he told the BBC. “Mentally that affects you as well as not knowing what will happen next as you work through the different infection stages. I am quickly heading towards the 60th year of my life, so it does worry you.”

After 14 days in isolation, he is on the mend and back at work on the front line. But the fight against the pandemic hardly seems fair.

It is estimated there are 5,000 health workers in PNG for a population of 10 million people.

The South Pacific nation is wracked by other communicable diseases, and has disturbing rates of HIV, as well as infant and maternal mortality. Covid-19 is heaping more pressure on a fragile medical system.

“It is going to make other diseases worse if we continue the way we are going with health workers getting infected [with coronavirus] and staying away from work and allowing all the other infectious diseases like tuberculosis and malaria to continue to spiral out of control,” Prof Pomat warned.

Covid-19 has been diagnosed in each of PNG’s 22 provinces. It’s unclear why cases are now rising. New strains of the virus might have been imported across a porous land border with Indonesia, but perhaps there is a more simple explanation.

“We became complacent and we let go of wearing masks,” said Prof Pomat. “From the leadership level, many of us were just as guilty as the normal people.”

Member of Parliament Richard Mendani, who was 53, has died with the virus, along with at least two judges.

“There is quite rampant community infection,” she told the BBC. “There’s been a slow rollout of testing capacity into the provinces. We are not sure what is going to happen in the coming weeks, but we just need to be vigilant and prepared for a potential surge.”

All of this is unfolding on Australia’s doorstep.

PNG’s Western Province is just 4km (2.5 miles) from Australian islands in the Torres Strait, and freedom of movement is allowed under treaty agreements.

“It is in Australia’s national interest to do everything possible to make sure than PNG has a health system and society that handles this crisis as best they can,” said Pryke.