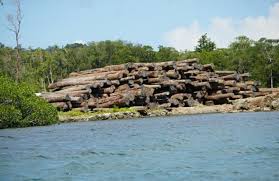 At the Korona logging camp on San Jorge Island in the Solomon Islands’ Isabel province, the logging machinery lay quiet. Except for the movement of three local security guards, the silence at this once-bustling log pond was deafening.

“The workers have gone home,” Eric Gnokro, a chief in the area who negotiated my entry into this tightly guarded logging camp, said. “There’s a dispute going on so work has stopped.”

Huge piles of freshly cut Xanthostemon logs, locally known as Tubi, lined the strip of dirt road that runs through the camp. Up to 30 workers – both local and foreign – used to live and work on the site, which spans an area of about 8,000 square metres.

Tubi is a rare tree species found only in two provinces in the Solomons group: Isabel, where Korona is, and Choiseul, to the country’s west.

The rich, dark hardwood is sought after mostly by Asian countries for furniture and is being advertised at US$2,300 (SBD$18,110) per tonne in some online markets.

Since it is a rare and endangered tree species, the Solomon Islands government has restricted its felling and export. For the people of Isabel, Tubi is a tree of significant value that holds a special place in their culture and belief system.

“Tubi grows in the wild, but we have a responsibility to look after them,” Gnokro explained. “That’s because it provides timber for our houses.”

Tubi trees also form a significant part of the natural forests, which villagers rely on for traditional medicine, building materials, soil cover, and as hunting grounds. Locals referred to it as the “iron tree” because it is strong and durable.

This is why Asian companies are coming out for it.

But under Solomon Islands’ environmental laws, Tubi is described as a “regulated and controlled species.” It can only be felled and exported on a commercial basis under strict compliance with the country’s Wildlife Protection and Management Act (WPMA).

To do that, a company or community has to apply for a special felling licence from the Ministry of Environment. But the ministry rarely issues such licenses. Ministry records show Tubi permits were previously issued only to allow illegally harvested logs to be exported.

So who felled the logs piling up at Korona?

“These are disputed logs,” Gnokro explained. “The company cut them illegally.”

The company he was referring to was Sunrise Investment Ltd, a Malaysian logging firm that was issued a five-year licence in 2018 to operate on Korona.

But the company’s logging licence does not include the felling of Tubi. It is only for other commercial species within the concession area.

Wilson Tohidi, chairman of the recently established San Jorge Island Resource Owners Association Trust Board, a body established to represent landowners on logging and mining issues, said Sunrise didn’t have permission to cut the Tubi but did so anyway.

“They were simply trying to steal our trees,” Tohidi said. “We are fighting to get our logs back.”

With financial contributions from community members, Tohidi initiated legal proceedings against the Malaysian logger in the Solomon Islands High Court that resulted in the “stop work” order on Korona.

Initially, Tohidi explained, all three landowning tribes on San Jorge gave their consent to Sunrise to log on Korona.

That consent, he added, was reached on the understanding that Sunrise would be there to log other commercial species and not Tubi, and to provide job opportunities, as well as income in the form of royalties to landowning tribes.

But Tohidi said after the company cut down all the other commercial species, they went on and started felling Tubi.

“They did this although they knew it was illegal,” he said.

Members of the community protested, but Tohidi said the company, with the support of a group of tribal members, refused to listen.

“That’s when we decided to go to the court and obtained an order that stopped them from their illegal felling,” he explained.

Sunrise has not responded to an email sent to them for comments.

But owner Richard Song Sing Ngea did plead guilty in December to a criminal case the Solomon Islands Director of Public Prosecution (DPP) filed on instructions from the Ministry of Environment, accusing the company of illegally harvesting Tubi trees.

Ngea was fined SBD$50,000 (USD$6,232), the maximum penalty for such an offence. But the company’s licence has not been cancelled so it can resume operations if it wishes.

Tohidi estimated that around 10,000 cubic metres of Tubi logs, worth tens of millions of dollars, are lying inside the logging camp.

That would make it the biggest stockpile of illegally harvested logs ever seen or recorded in the Solomons.

Tohidi said landowners would earn more money from their trees if they sell the logs themselves overseas.

A history of exploitation

While Sunrise Investment still has two more years to operate on San Jorge before its license expires, locals claim there are no more trees left to log on the island except Tubi.

Located at the southern end of the province of Isabel, San Jorge is a resource-rich island with an area of 184 square kilometres. It is host to virgin forests and large deposits of nickel.

Spanish explorer Alvaro de Mendana gave the island its current name during his 1568 expedition to the Solomons.

On one end of the island, more than 70,000 metric tonnes of nickel ore worth up to USD$30 million (SBD$256 million) have been lying idle in a deserted mining camp since September 2019.

The nickel was extracted by Axiom Mining Limited (AML), an Australian firm that holds a lease over the mining tenement on the island.

However, Axiom was unable to export the nickel ore after the Solomon’s government refused to grant it an export permit on the basis that the company had failed to obtain a provincial business licence from the local government of Isabel.

Axiom has challenged the decision and the matter is currently before the courts.

San Jorge is also an island that is highly revered by the people of Isabel. That’s because they believe it’s the final resting place for the spirits of their dead.

But since the late 1990s international logging companies have been pillaging San Jorge of its virgin forests and shipping the trees to places such as Malaysia and China, where they’re turned into furniture and building materials.

“Today, the only loggable trees on the island are Tubi,” says Samuel Efulu, a landowner and elder of Talise, the only village on San Jorge island.

Efulu, now in his 50s, has lived all his life on San Jorge and witnessed first-hand how Asian loggers have been “stealing” Tubi from local landowners.

“They have been doing it since the first logging operations in the late 1990s,” said Efulu, who had previously worked with the loggers.

In the past, he said, the loggers mostly cut the Tubi when they were constructing their roads.

“They would just mix the Tubi logs with other species and export them without any questions from forestry officers,” Efulu said.

Battles over Tubi heat up

About six kilometres across the pristine Thousand Ships Bay on the mainland of Isabel, another huge stockpile of Tubi logs is visible at Lelegia log pond.

Mas Solo Investment Ltd, another Malaysian logger, holds the lease over the area. Like Sunrise Investment, their licence also does not allow them to fell Tubi.

“Mas Solo gave the excuse of cutting them down while clearing their road into the forest,” Tohidi said. “We’ve included those logs in our High Court challenge so Mas Solo cannot ship them out.”

In 2019, a group of landowners took up a court case against the company over the Tubi logs it felled. The High Court issued an order preventing Pacific Logging from shipping the logs out. As a result, the logs were kept at the Totoru-Rarade log pond for months until September 2020 when the company covertly shipped them away.

Mary, a mother of two in the nearby commercial station of Kaevanga, remembered that incident quite well.

“The barge the company sent to pick the logs arrived there in the evening,” Mary said, pointing to the log pond at Totoru. “It was not unusual for a barge to come and berth at the log pond so there was nothing suspicious about the arrival of this barge,” she continued.

Under the cover of darkness and with no villagers watching, Pacific Logging loaded the barge and took off during the night. News of this “illegal shipment” spread out the next day and quickly reached environmental authorities in capital Honiara. Together with Customs, the logs were seized and stored at the premises of another Asian logger at the port of Noro.

But Tuki, who is the country’s Minister for Women and Youth, claimed the Tubi shipment that was seized and held at Noro was her company’s property.

“We have already bought the logs from the original Rarade landowners,” she said.

“They’ve collected their money from us which they used to meet their children’s school fees,” Tuki added. “In fact, it was the original landowners of Rarade who agreed for us to harvest their Tubi trees.”

But in a separate Tubi case in 2015 before the Magistrate Court, Principal Magistrate Augustine Aulanga stated that any Tubi felling that was done without a licence from the Department of Environment would always be illegal even if landowners gave their consent.

Following Pacific Logging’s covert shipment, landowners took out a court order that restrained Tuki and all her agents from dealing with the logs that were seized and held at the port of Noro. The case is expected to be heard this year.

At the Ministry of Environment, Permanent Secretary Dr. Melchior Mataki said the law on the illegal harvest of Tubi is clear.

“It’s a violation of the relevant sections of [the] Wildlife Protection and Management Act (WPMA) 2017 if you fell Tubi without a permit,” Mataki said.

He said his ministry acted on the matter and referred the Sunrise case to the police, who then initiated the criminal case. Mataki said the other cases involving illegal harvesting of Tubi are being pursued as well.

While some welcomed the ruling against Sunrise, long-time environmental activist Lawrence Makili described it as a mockery to the Solomons environment laws.

“What is $50,000? That’s nothing compared to the damage this Malaysian logger caused to our environment and his deliberate act in breaking our laws,” Makili said. “This Malaysian company should be closed down and its owners deported.”

Makili said loggers with a no-care attitude must not be entertained in the Solomons.

Back at the Korona logging camp, the guards continue to keep watch over the huge stockpile of logs, unaware that a new battle has emerged over who holds legal rights to them.

According to Mataki, the Solomons environment minister has exercised his powers of forfeiture and declared the logs now “government property.” But Tohidi and his group argue the logs are rightly theirs.

The rights issue will be determined in the High Court in the coming weeks….PACNEWS

This feature story was produced with support from Internews’ Earth Journalism Network (EJN) under its Asia-Pacific Story Grants 2020-21.