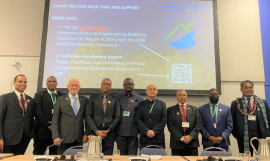 As negotiations to secure an ambitious landmark framework to protect and restore nature around the world continue at COP15, several Small Island Developing States (SIDS) have taken a critical step forward to advocate as one for agreed common priorities, including the need for greater means of implementing biodiversity objectives, in SIDS.

They have done this through the launch of the SIDS Coalition for Nature, and the announcement of a Call to Action for “Enhancing Means of Implementing Ambitious Objectives for Nature in SIDS under the global biodiversity framework.”

The Coalition is co-led by the Governments of Samoa, Cabo Verde and Seychelles. Other Pacific SIDS who are members of the Coalition are Kiribati, Solomon Islands, Tuvalu and Vanuatu.

Last Thursday, the Coalition was launched by the Deputy Secretary-General of the United Nations, Amina Mohammed and Cabo Verde’s Minister of Environment, Gilberta Silva during a ceremony facilitated by the Chair of the Pacific Small Islands Developing States (PSIDS) and Samoa’s Permanent Representative to the United Nations (UN), Fatumanava-o-Upolu III Dr Pa’olelei Luteru.

“SIDS are pioneers of biodiversity, demonstrating their intrinsic link to nature which is fundamental to their livelihoods and identity. Simply put, SIDS have shown that when you talk about nature, you talk about SIDS,” said Mohammed. She commended SIDS countries for making biodiversity protection a top priority and highlighted the Palau National Marine Sanctuary, one of the world’s largest areas of protected ocean, as an example of biodiversity conservation leadership, which she said should be emulated.

Cabo Verde’s Minister of Environment, Gilberta Silva, said: “As SIDS, our highest political and strongest commitment are not enough. While we have been frontrunners in nature conservation by using our unique environmental characteristics to transform our structural challenges into opportunities, we still need greater and more targeted support to expand our best practices, learn from each other and bridge our recurrent gaps in implementing ambitious nature objectives.

Samoa’s Minister of Natural Resources and Environment (MNRE),Toeolesulusulu Cedric Schuster, who was among a list of speakers during the launch, said the launch the SIDS Coalition for Nature is one of the necessary steps required to conserve biodiversity for today and the future.

“We have learnt from generations past that in order to continue to enjoy the benefits of our natural world, we must care for it and protect it to ensure they provide for us and future generations,” Toeolesulusulu said.

“It is therefore of critical importance that our biodiversity and environment is conserved for today and the future. We urge all nations to commit to the common goal of a healthy planet, and to work with SIDS in implementing more of what is necessary to meet our biodiversity goals and objectives as set out in the CBD.”

Toeolesulusulu also drew attention to the fact that Pacific SIDS may be small in size but they are large ocean states.

“Our reliance on marine resources ensures we must pay more attention to marine biodiversity, as we do to terrestrial biodiversity. Reef ecosystems restoration projects, mangrove rehabilitation, bans on single use plastics which end up in the marine environment, and endanger valuable fisheries, are some of the ways we are leading efforts in biodiversity restoration,” said Minister Toeolesulusulu.

“In addition, considerable efforts to maintain many of our country’s reserves and protected areas, are spent in managing invasive plants that threaten our environment. There is no doubt that the conservation of biodiversity is important to keep our ecosystems healthy and functioning and good management of biodiversity ensures the sustainability of Pacific culture and economic development.”

While the SIDS Coalition for Nature is led and formed by SIDS countries only, it will also be open to non-SIDS countries as Friends of the Coalition, who can support the coalition by adding their “voice of support” to the messages and positions promoted by the Coalition. The Coalition will also explore synergies with other Coalitions and Alliances advocating for and promoting relevant biodiversity targets for SIDS.

UN Secretary-General’s Special Envoy for the Ocean, Peter Thomson, spoke in support of the Coalition reminding there cannot be a healthy planet without a healthy Ocean.

“In his State of the Planet address delivered at Colombia University in New York, the UN Secretary-General, Antonio Guterres, said humanity is waging a suicidal war upon Nature. He reported that one million species are at risk of extinction and that ecosystems are disappearing before our eyes. A year earlier at the Climate COP in Madrid, he had warned that three major reports of the IPCC confirm we are knowingly destroying the life-support systems of our planet.

“I sum up our predicament in the shape of coral. The IPCC special report on the impacts of global warming of 1.5 degrees Celsius above pre-industrial levels, states with high confidence that 99% of coral reefs will be lost when we go through the dreaded level of 2 degrees Celsius. Coral reefs are home for up to 30% of marine life, they are the bunkers of marine biodiversity, and it’s an understatement to say their loss will have major consequences for the health of the Ocean. At this point, remember we cannot have a healthy planet without a healthy Ocean.”