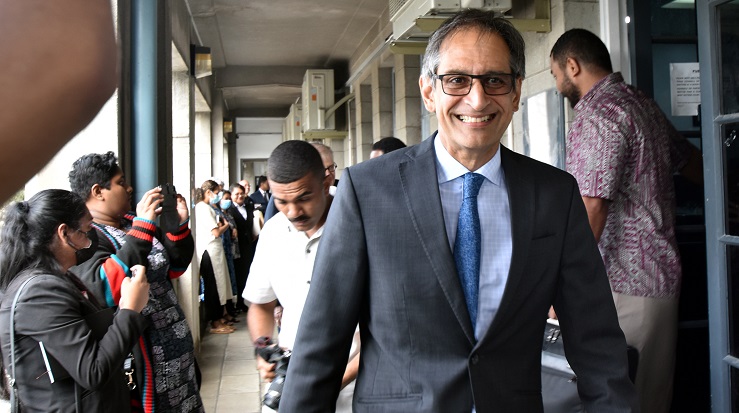 Fijian lawyer Richard Naidu has been found guilty of contempt of court.

Naidu is convicted of scandalising and ridiculing the courts and the judiciary in a Facebook post where he made comments in relation to a judgment delivered by the High Court in Suva.

Tuesday’s decision by Judge Justice Jude Nanayakkara was handed down to Naidu, in a packed civil high court in Suva that spilled over to the corridors, in the presence of family members, friends, supporters, politicians, and a handful of 2022 General Election candidates of the National Federation Party and People’s Alliance including their respective leaders Professor Biman Prasad and former Fijian Prime Minister Sitiveni Rabuka.

The decision comes less than two weeks after a one-day court hearing over a Facebook post by Naidu in early February this year in which he pointed out a misspelt word in a judgement that was handed down by a civil high court in Suva late January.

The case against Naidu was reportedly filed by Fiji’s Attorney General Aiyaz Sayed-Khaiyum on the grounds that the social media post ridiculed the judiciary.

Naidu was convicted accordingly and awaits mitigation and sentencing submission scheduled to be held on 05 January next year.

Meanwhile, leaders of the People’s Alliance Party and the National Federation Party Professor Biman Prasad and Sitiveni Rabuka say they remain steadfast and will continue the campaign to form government in the forthcoming 2022 General Elections.

Professor Biman says if anything Tuesday’s ruling handed down to prominent Fijian lawyer Richard Naidu, who was convicted of contempt of court, has solidified the two parties’ intent to win the election.

“Richard is not only a good friend, but an honourable man, a man of absolute integrity, and someone we respect a lot. In fact, I was looking forward to having Richard on the National Federation Party team,” Professor Biman said.

Rabuka who also attended Tuesday’s court ruling in Suva echoed the same sentiments, as well as issued a word of caution to candidates to tread carefully as they go about their rallies.

Acknowledging the court’s decision which he said should be respected, added: “The People’s Alliance and the National Federation Party will continue the campaign for the elections coming up, undaunted by this major setback in our efforts. But we promise to canvass support within the group, make sure we tell our supporters and fellow candidates to see what can happen to a prominent lawyer and a prominent citizen, so be careful.”

The 2022 General Election started with the first postal ballot filed on 18 November. Pre-poll in the outer islands starts on 05 December in the lead-up to election day proper on 14 December

Tonga restrictions eased as COVID cases drops across the country