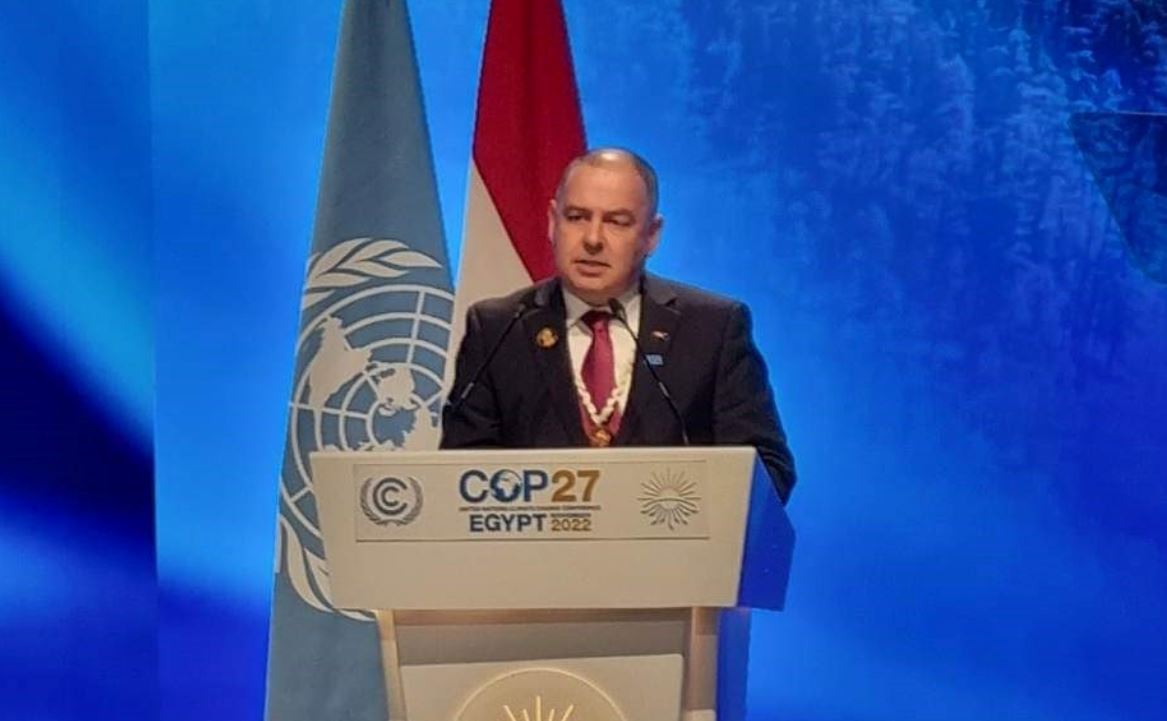 It was my privilege to lead a delegation from the Cook Islands to Cop27, which was hosted by Egypt, at Sharm El Sheikh.

Expectations of the delegation prior to leaving were of cautious optimism across some of the key issues, including how the biggest global emitters are finding ways to reduce emissions, and how the global community will find ways to support nations such as ours, one of those most vulnerable to the adverse effects of climate change.

Priority issues negotiated at Cop27 were ensuring that partners in developed countries enhanced their ambitions under the Paris Agreement to keep global temperature increase to 1.5°C below pre-industrial levels.

Other key issues included increasing the pledges and commitments to support those most vulnerable through climate finance, including the doubling of adaptation finance from 2019 levels. There were also moves to reach an agreement on an environmental loss and damage response facility, which will support developing countries.

I also attended high-level events and meetings where I took the opportunity to advocate for global island issues in my capacity as Head of Government for the Cook Islands and as a member of the Alliance of Small Island States.

The Cook Islands is one of 14 countries across the Pacific region where leaders have expressed their common and collective view that we are facing a climate emergency.

We share the opinion that the global community must act urgently to avert humanitarian disasters as a result of increased extreme events such as more severe cyclones, high-intensity periods of rainfall and droughts that cause crop failures. These short-term impacts, alongside slower-onset events such as sea-level rise and ocean acidification, will have a profound and significant effect on the islands’ populations and flora and fauna, including displacement and migration of communities as the effects take hold. Climate refugees, if you will.

Alongside other regional Pacific leaders, I took this call to the developed nations of the world: they must raise their ambitions and urgently reduce their emissions across their economies to save the world and those who live at the forefront of climate change. All of us recognise that the transition from fossil fuel use and the phasing out of coal mining is a prerequisite to enabling us all to meet the Paris Agreement target.

While the responsibility for climate change lies at the feet of the developed world, large developing country emitters must also transition their economies and reduce emissions. Only through a collective approach will we reach the goal and ensure human security is addressed. The emission-reduction pathways we advocate, for example, comprise a shift out of fossil fuel/coal power generation and give the transport sector a total shift away from the combustion engine. All of these economy-wide shifts can be achieved today, but they require strong political will.

At Cop27, the opening session of the high-level segment gave the world’s leaders a platform to express their views on how climate change and global warming can be addressed. The world has just witnessed Covid-19 and new conflicts are emerging, while old ones rage. We see on a daily basis the cost of global disasters. We must, therefore, acknowledge the even graver one posed by climate change.

Why is it so complex and difficult to address climate change globally? The real answer is the political reluctance of governments to transition away from polluting technologies. It is hard, expensive and requires real commitment. But this brings me back to our nation. While we are a minuscule emitter in terms of global emissions, we are already on a pathway to energy security and to our communities adapting to the impacts. We are reporting to the UN Climate Convention and the Paris Agreement on our ambition and commitments to ensure we play our part as a member of the global community.

We also see win-win benefits in terms of our mainstay income earner, tourism. With a tourism-visitor ratio of 10 visitors to one resident, making the sector greener will have real impact, whether that be more electric vehicles for visitors, renewable energy availability, nature-based solutions to address coastal and foreshore erosion issues and organic food production. Each of these approaches will help the Cook Islands meet its 2040 Net-Zero target, with technical and financial support where needed, domestically and externally.

The Cook Islands is already experiencing climate effects at a rate not previously expected, such as a higher than average yearly sea level rise, which has been monitored by gauges over the past 10 years. Increased melting of glaciers and the Arctic ice cap, as was recently announced, will add a further 200 millimetre of sea level over the next 10-15 years. This could mean displacement of communities on our remote, low-lying atoll islands, and increased frequency and severity of effects from storms and cyclones to our coastal communities nationwide.

Over the past 10 years, the Cook Islands has been experiencing increased occurrences of droughts on islands in the northern part of the country that continue for months, whereas our southern islands are at the same time experiencing high intensity but short rainfall events with flooding and damage. Regional and international scientists report that this state of affairs is a harbinger of full-fledged climate impacts.

Finally, we now know that without collective will in the aftermath of Cop27 to address climate change and support to vulnerable countries, we will overshoot the 1.5°C of the Paris Agreement. The picture is grim. Without any action we are heading to a warmer world of 2.8°C by 2100, if not before. Sea levels would rise rapidly, mass wildlife extinctions would occur, extreme events such as storms and wildfires would destroy significant populations of humankind. If this is the type of world we want to leave to our children and their children, then we need do nothing. But at Cop27, even though politics impeded collective agreements on many issues, we all knew what was at stake and we all must do our part. The time is now – urgency demands it.