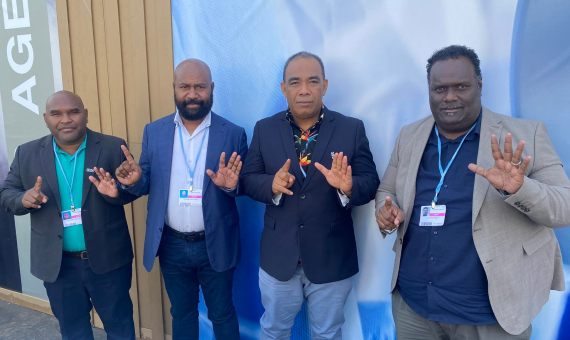 As COP27 winds down in Sharm El-Sheikh, Egypt, the Solomon Islands has added its voice to last minute desperate pleas to the COP Presidency, and world leaders, to ensure the agenda item on the establishment of a Loss and Damage funding arrangement is given the attention it deserves.

As negotiations on an issue many delegates say will determine the success and failure of COP27, the Permanent Secretary for the Ministry of Environment, Climate Change, Disaster Management and Meteorology (MECDM) of the Solomon Islands, Dr Melchior Mataki said COP27 cannot end without any substantial progress on the issue.

“We came to Sharm El Sheikh with a clear mandate from our leaders, and our people that we needed to have this Loss and Damage fund established. I want to state clearly that the Solomon Islands is very concerned about the lack of progress made in the political commitment to the decision to establish a Loss and Damage Fund for this COP,” he said.

“The process hasn’t been very clear, and we don’t really know how that is going to progress in the next couple of hours. For us, this is a red line issue, we really needed to have a decision here at COP27.”

According to the Permanent Secretary, the process on Loss and Damage in Sharm El-Sheikh has been unclear and it is time for the COP Presidency to show leadership and steer discussions towards a successful outcome.

“The Solomon Islands wants to state categorically that we cannot keep on shifting goals and we can’t agree to anything less than establishing a Loss and Damage Fund,” Permanent Secretary Dr Mataki said. “We are very clear on Loss and Damage, we have lost islands, our people have lost their livelihoods and these are losses you cannot address through adaptation. People’s lives have been thrown off track from how they were living in the past. Loss and damage is not in the future, it is happening right now and this is why it is pertinent the Loss and Damage funding arrangement is set up right now.”

The call from the Solomon Islands echoed the concerns expressed by Republic of Palau’s Minister of State, Gustav N. Aitaro and the Federated States of Micronesia’s Minister of Environment, Climate Change and Emergency Management, Andrew R. Yatilman, who said: “We would like to convey our concerns about the process that has been presented to us today. We came to COP27 with much enthusiasm, we were pleased that Loss and Damage had been accepted on the agenda. However, today we have been told that at this COP27, we are not expected to address the issue of financing in Loss and Damage.

“To be stonewalled like this is disappointing. We’ve crossed oceans, mountains, rivers to come here to address this issue. This latest development is yet another challenge we face on top of dealing with the impacts of the climate crisis.”

“We have come too far to fail on loss and damage finance. Three quarters of humanity is relying on a favourable outcome at COP27,” said the AOSIS Chair, Minister Molwyn Joseph of Antigua and Barbuda.

“AOSIS and our fellow developing countries have toiled for the past thirty years to be heard on this issue. AOSIS has worked tirelessly this year to build consensus, devise a clear loss and damage response fund proposal, and ensure the commitment of the international community to come to COP27 and negotiate on this issue in good faith. Now, we are here, and some developed countries are furiously trying to stall progress and even worse, attempting to undermine small island developing States. So, not only are they causing the worst impacts of the climate crisis, they are playing games with us in this multilateral process. There have only been informal consultations, to date, of this critical agenda item, and no official launch of negotiations through a Joint Contact Group.”

The AOSIS Chair said they appreciate the willingness to engage from countries such as the United Kingdom and New Zealand and called on other developed countries to uphold the integrity of this process which is mandated to support the most vulnerable.

COP27 has been billed as the implementation COP, and for Permanent Sectary Dr Mataki, it is time to implement loss and damage finance.

“We also wanted to ensure we have a mitigation programme agreed to that is ambitious that will really keep global temperature rise below 1.5degrees. I am concerned and sad that the major emitters are not committed and taking concrete steps to drastically cut their emissions. The chances of overshooting 1.5 is very likely if they do not take these measures, and that will have a significant impact for all the Solomon islanders and all the rest of the Pacific for that matter.”