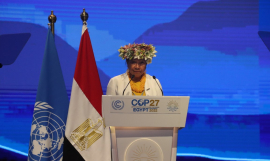 The small island of Niue in the middle of the vast Pacific Ocean has demonstrated climate change leadership at COP27, showcasing a home-grown innovative solution to raise funds for climate adaptation and mitigation.

Speaking to an audience of world leaders during the resumed high-level segment of the COP27 at the Sharm El Sheikh International Congress Centre on Tuesday, Niue’s Minister for Natural Resources, Esa Sharon Mona Ainu’u, touted the aspirations of the island nation’s environment and non-financial instrument called Ocean Conservation Credit.

“Niue has done everything that we possibly can to access climate finance to help us mitigate and adapt. There are large disparities in accessing Climate finance. This is an unacceptable situation for Island Countries whose existence is under threat,” the Minister said.

In a world first, Niue’s objective is to establish a Niue and Ocean Wide Trust Fund that can provide a consistent funding stream to help climate mitigation and adaptation priorities.

“The funding mechanism is scalable and replicable,” the Minister said. “Our goal is to raise at least $32 million (US$19 million) to capitalise our Trust Fund and making available $1.5 million(US$918,000) annually for 20 years.

“The $32 million (US$19 million) is based on the aggregated costs of protecting and maintaining 1 square km of the Moana Mahu Marine Protected Area comprising 40 percent of Niue’s EEZ or 127,000 square kms.”

The initiative is born out of the need for urgent action, with the Minister saying Niue simply does not have the time to “navigate the camel’s eye, to find the passcode, to unlock that illusive treasure chest.”

She reiterated the call made by many Pacific leaders who spoke at COP27, demanding urgent and ambitious climate change action.

“I stand on the shoulders of my ancestors, beating and echoing the drums for our survival, for our future and the generations yet to come. The drumbeats are getting louder, with greater urgency for action,” she said. “COP27 is an implementation COP. Let’s make it happen. Let’s turn those drumbeats from our islands to be sounds of celebration, sounds of action and not sounds of despair.”

For that to happen, Niue called for timely access to climate finance, delivered through modalities with the least amount of transaction cost, and commensurate with our absorptive capacity.

“These are the sounds that we seek, and we look to you our partners to join us in our journey.Let’s honour the drumbeats by availing those climate funds promised to us; expedite their release so we can address loss and damage, and streams of program activities set out for execution, and work in unity to reach a common goal,” the Niuean Minister said.

As the Pacific Region’s Political Champion for Gender and Social Inclusion, the realities women and girls face every day, from experiencing domestic violence, bearing the burden of unpaid work, to barriers limiting their economic empowerment and participation in public life, were not lost on Ainu’u.

“And if this isn’t enough, they with other marginalised communities, have to deal with the disproportionate impacts of climate change. I urge all of us to include women, girls, children, youth, persons with disabilities in all our decision-making and actions,” she said.

“Our Pacific Leaders have endorsed our 2050 Strategy for the Blue Pacific Continent, to guide our journey as a one, strong, secure, inclusive, resilient Blue Pacific. Ensuring a future that we can be proud of to leave behind for our grandchildren – the mokopuna of Moana.”

Despite the challenges of the climate crisis, Ainu’u concluded by calling on world leaders at COP27 to drown out the cries of despair and calm the beating hearts of fear from our kids and our vulnerable communities, assuring them that all will be ok.

“Let’s change the drumbeats to action, innovative and sounds of joy. It starts with us as world leaders.”