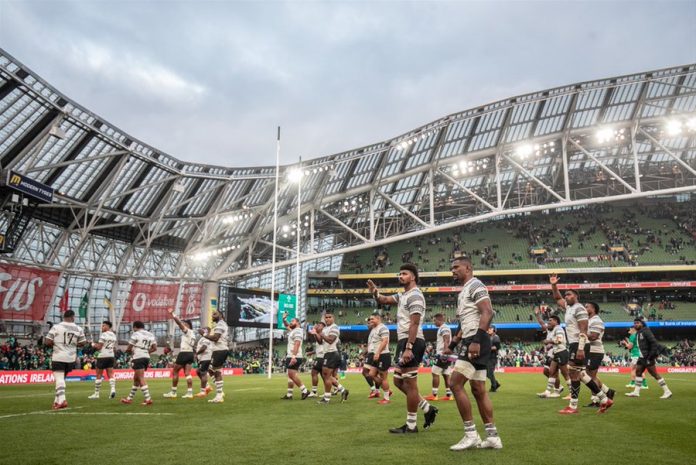 Flying Fijians Head Coach Vern Cotter has managed to line up a formidable side despite the team facing player suspension and injuries.

Cotter has made 7 changes from the Irish match to his 23-member squad in the hope to continue its unbeaten record against the French Barbarians on Sunday.

He said “We have been addressing a few injuries whereby we have got Vilimoni Botitu who has a knee injury, Levani Botia has an ankle injury, Albert Tuisue suspended for four matches and Ratu Leone Rotuisolia had a Head Injury Assessment (HIA) and he won’t be available this weekend.”

Veteran Lock Apisalome Ratuniyarawa comes into the first 15 and will pair up with Temo Mayanavanua who was part of the side in the first Autumn Nations Series match against Scotland.

Cotter has moved Isoa Nasilasila from the second row to the Blindside flank and has put Kitione Kamikamica on the Openside. Viliame Mata remains at number eight.

In the backs, Simione Kuruvoli gets his first start ahead of Frank Lomani who has not been included in the team for this weekend.

On the bench, Tevita Ikanivere, Livai Natave and Luke Tagi are expected to continue leading the scrum in the second half of the game, John Dyer will be vital in the rucks while Mesulame Dolokoto moves from hooker and will be featuring at Looseman. Peni Matawalu, Adrea Cocagi and Sireli Maqala are the replacement for the backs.

Cotter said that they are making sure to get the content right this time around and address certain key areas, especially the factors leading to cards and he hopes to see improvement in the game with better results.

“We have teams that play a close brand of rugby against us such as double pushing scrums and drive lineouts a lot to provoke errors in our game so we are working hard technically and tactically.

Psychologically we have to make shifts and adjustments in how we approach the game around discipline in tackle areas” said Cotter.

He further added that the Flying Fijians expect nothing less than a tough battle against the French Barbarians which consists of French Under-20 and senior players.

“Just like any other French team, they will be very strong and aggressive in the set pieces.

We know what we are in for and we are preparing for a tough game but with dry track and ability to perhaps move the ball and attack, we will be displaying a much better game” said Cotter.

The Flying Fijians take on French Barbarians at 2am FJT on Sunday.