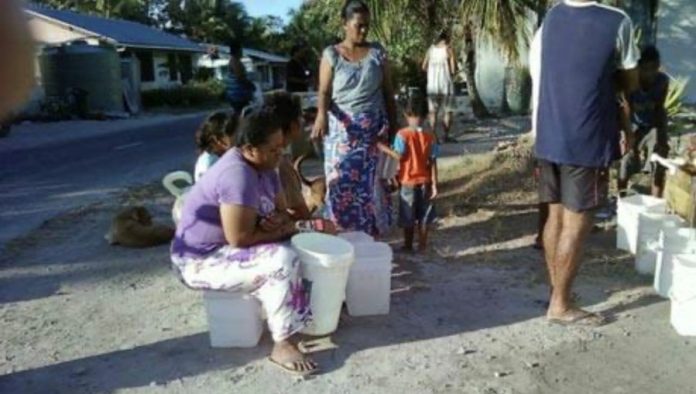 The tiny Pacific nation of Tuvalu is not just on the brink of sinking due to climate change-induced sea level rise.

The island with a population of just over 11,000 people are grabbling with an extreme drought, which has forced the Government to declare a State of Public Emergency this week.

The proclamation, signed by Tuvalu’s Governor General, Sir Tofinga Vaevalu Falani, reads: “By the powers conferred upon me under section 35 of the Constitution, I hereby declare a State of Public Emergency for the extreme drought conditions on the whole of Tuvalu. This proclamation comes into effect on this 8 day of November, 2022 and shall continue for fourteen days unless revoked or varied.”

The developments in Tuvalu underscores the compounding impacts of the climate crisis, which have brought world leaders – including Pacific leaders – and more than 55,000 delegates to the red sea city of Sharm El-Sheikh for the 27th United Nations Framework Convention on Climate Change Conference of the Parties (UNFCCC COP).

In continuing to raise the alarm about the “lived reality of climate change” in his country at COP27, Tuvalu’s Prime Minister, Kausea Natano said if COP27 does not conclude with a meaningful outcome for his country and other similar nations, Tuvalu is quickly losing faith in the UNFCCC institution to deliver sustainable outcomes for all, especially the most vulnerable.

The drought in Kiribati is declared during the triple La Nina event that started in 2020 and the associated compounding impacts of the absence of rainfall and saltwater intrusion to fresh water aquifers due to sea level rise.

“The IPCC reports are science based and their narrative is clear and honest, and may I say, so also the experiences and realities of my country’s plight. Tuvalu and many islands are struggling to cope with sea level rise that exacerbates many other development challenges,” he said.

Tuvalu is not the only Pacific country to have recently declared a state of emergency for water shortages. The President of Kiribati, Taneti Maamau, told leaders attending COP27 that his nation has had to do the same.

“This year, Kiribati declared a state of disaster to manage and respond to the impact of severe drought with some of our islands frequently inundated by storm surges,” he said. “The impact of extreme spring tides continues to be a threat to our economy, our future development and destroying the very fabrics of our livelihoods.”

COP27 is also taking place against the backdrop of inadequate ambition to curb greenhouse gas emissions. According to the UN’s Intergovernmental Panel on Climate Change, CO2 emissions need to be cut 45% by 2030, compared to 2010 levels to meet the central Paris Agreement goal of limiting temperature rise to 1.5 degrees Celsius by the end of this century. This is crucial to avoid the worst impacts of climate change, including more frequent and severe droughts, marine heatwaves and rainfall extremes.

Speaking at the opening of COP27, the UN Climate Change Executive Secretary Simon Stiell said the geopolitical situation – the pandemic, the food and energy crises have hit countries, economies and most importantly, individuals hard.

“Let me take this moment to humbly remind all those engaged in this process, of a simple fact. For decades, communities all over the world, very often the most vulnerable people, have been dealing with a continuous stream of crises – facing impact after impact of climate change,” he said. “This has stripped generations of their lives and livelihoods.”

Stiell demanded more accountability from all the parties.

“I found myself in my Accountability-Chief role, last week, when we launched the NDC synthesis report and I had to report that only 24 countries had come forward with tightened national plans since COP26. 24 is not 194,” he said.

“So here I am now, looking out at 170 countries that are due to be revisiting and strengthening their national pledges this year. I want to take a moment now to recognize the Glasgow Climate Pact. We made this Agreement together only last year. I am not in the habit of rescinding my word. I firmly expect all parties to act the same way. Stick to your commitments. Build on them here in Egypt. I will not be a custodian of back-sliding,” he said.