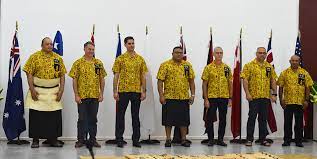 Climate change is the single greatest threat to the Pacific say the South Pacific Defence Ministers who met in Nuku’alofa last month.

The Prime Minister’s Office in issuing the SPDMM Joint Communique, stated that delegates adopted and reaffirmed the importance of the SPDMM as a forum to enhance cooperation among defence partners and to collectively address Pacific security challenges.

“Progress on the seven outcomes of the 2021 SPDMM represent concrete steps towards our shared vision of a peaceful, secure and resilient Pacific region.”

Delegates acknowledged the challenges posed by traditional and non-traditional security threats including climate change, the single greatest threat to the Pacific as set out in the Boe Declaration – and underscored the importance of collective action in responding to shared security challenges.

They affirmed the success of recent regional co-deployments as testament to the strength of the Pacific family, and acknowledged the opportunity to build on this model for regional responses in the Pacific.

“Delegates also recognised the value of the now annual Regional Exercise LONGREACH in enhancing regional interoperability and looked forward to the next iteration in Papua New Guinea in 2023.

“Delegates reaffirmed their intent to improve information-sharing within the SPDMM, which will advance collective responses to regional challenges.

“Delegates agreed to a plan to refresh the POVAI ENDEAVOUR Framework and Cooperative Exercise Plan; reaffirming a shared commitment to improving coordination and interoperability between militaries in the Pacific.

They agreed to recommence the Future Leaders Summit in 2023, which had been postponed due to the COVID-19 pandemic.

They also agreed to re-invigorate the outcomes and recommendations from the Women, Peace and Security Summit hosted in Samoa in 2019.

Delegates thanked Tonga for its hosting of the 2022 Meeting and agreed that France would host the next SPDMM in New Caledonia in 2023.

Global and Pacific Civil Society comes together to back Vanuatu Government...

COP27: $3.1 billion plan to achieve early warning systems for all...