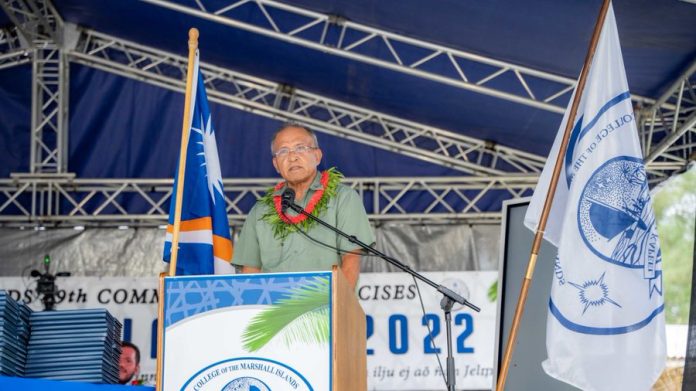 The Marshall Islands ended two years of being at the centre of controversy over the possible break up of the Pacific’s premier regional organisation when its parliament adopted resolutions reaffirming its membership in the Pacific Islands Forum.

These two resolutions end controversy and speculation about the pullout of the Marshall Islands from the Pacific Islands Forum at a time the islands are under stress from geopolitical tussling by China and the United States and its allies for influence in the region.

Resolution 63, introduced by Speaker Kenneth Kedi, rescinded Resolution 35, which called for ending the country’s membership in the Forum when it was adopted in 2021. The second piece of legislation, Resolution 77, introduced by Foreign Minister Kitlang Kabua and nine other Nitijela members, specially calls on the Cabinet and the Ministry of Foreign Affairs to take necessary actions to resume formal linkages with the Forum.

The controversy developed over the demand by the five Micronesian region nations to have their nominated candidate, Marshall Islands Ambassador Gerald Zackios, be the Secretary General of the Forum. When put to a vote in early 2021, current Secretary General Henry Puna won, 9-8. Following the vote, the five countries announced they’d be pulling out and all filed formal “denouncements” of membership to the Fiji government, which hosts the Forum Secretariat in Suva. Following a year of behind the scenes diplomacy and proposals for reform, four of the five withdrew their plan to withdraw. Only Kiribati, which has also pulled away from other regional initiatives, pulled out from the Forum.

Although the Marshall Islands was at the centre of the storm since it was the country’s nomination that became the flashpoint for the pullout from the Forum, President David Kabua in February made it clear he wanted no part of breaking up the Pacific Islands Forum.

“The true essence of the ‘Pacific Way’ is purposeful unifying action for the common good, building bridges of understanding, nurturing strong bonds of friendship and goodwill, and peaceful coexistence among people and nations,” Kabua said in an appeal to the four other Micronesia leaders written in February. The demand that Puna step down as a condition of remaining in the Forum did not sit well with the President, who said to leave the Forum under these circumstances “could inflict a psychological blow to the soul of the Forum…that could be counter-productive to our long-term collective interest.”

Still, Resolution 35, adopted by the parliament in 2021, was a hurdle to be leaped. It had approved the withdrawal of the Marshall Islands from the Forum, which Speaker Kedi’s recently introduced Resolution 63 called “the preeminent regional political organization.” Resolution 63 eliminates the earlier resolution, noting the positive action of reforms proposed by the Forum, including rotation of the Secretary General position of the Forum on a sub-regional basis and establishment of a North Pacific sub-regional office.

“The Nitijela regards international cooperation as the foundation rock for building strong bridges of understanding and enduring friendly relations among peoples and nations,” Resolution 63 said. It said membership in the Forum is “vital and essential” to the RMI’s foreign policy.

Resolution 77, introduced by the Foreign Minister, reaffirmed Marshall Islands membership in the Forum and references the 2005 Agreement Establishing the Pacific Islands Forum, confirming the Marshall Islands’ commitment to the purposes of the Forum agreement.

Further, it said the Marshall Islands “welcomes the terms of the Suva Agreement of 07 June, 2022” for Forum family solidarity.

The resolution supported the Cabinet “taking the necessary steps” to reaffirm the country’s membership in the Forum.

Taiwan not ruling out talks to win back Solomons, Kiribati