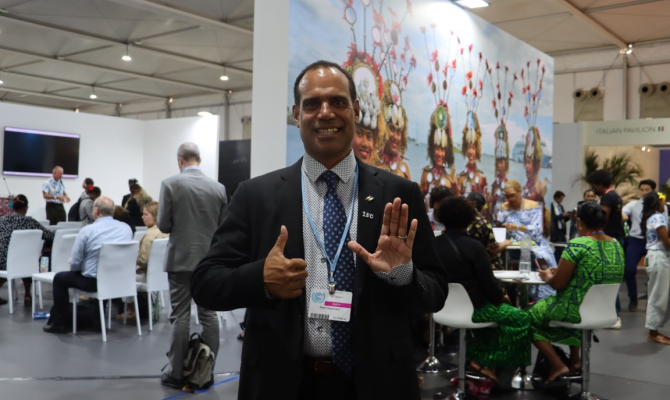 As negotiators scramble to finalise a global climate change pact text before COP27 ends on Friday, some Parties are already predicting a failure of the Egyptian Presidency to listen to the pleas of vulnerable nations – especially around loss and damage financing.

For countries like Vanuatu, who have been engaged in the lobby for a financing mechanism under the UNFCCC process for 30 years – it may be time to take the fight elsewhere, warned Climate Change and Environment Minister, Ralph Regenvanu.

“We are out of time, out of money and out of patience, said Regenvanu.

He said the message from Pacific Small Island Developing States and like-minded vulnerable countries is ‘establish the loss and damage climate facility at this COP.’

“It seems there’s endless pots of money for pharmaceuticals, weapons and military but not to address climate sufferings inflicted on the developing world.

The vocal Pacific minister said the creation of Loss and Damage finance facility will determine the success or failure of collective leadership here at COP27.

“Those responsible for the climate crisis have failed in their obligation to keep us under 1.5 degrees and failed to mobilise the promised annual US$100 billion climate finance. If nations leave this meeting without having shown the political will to hear the desperate calls of the most vulnerable countries of the world to establish the fund, we will consider this a severe abrogation of their obligation to us under the United Nations Framework Convention on Climate Change (UNFCCC) and the Paris Agreement.

Regenvanu revealed many Parties with the UNFCCC process are beginning to question the integrity of the COP process and “will take the fight of our lives elsewhere.”

Vanuatu, like most Pacific countries, is already paying for loss and damage and has been doing so for many years.

“More and more my government has been forced to use its own financial resource to meet financial relief for rehabilitation and reconstruction diverting resources away from essential development priorities such as education and health.

“Vanuatu first raised the need for a loss and damage facility in 1991 and 30 years later the need is existential. Waiting for another two years is untenable.

“We don’t expect that the full details of the governance of the fund, modalities and operations of the fund to be worked out now. This can be done in the next few months or years for a decision at the next gathering of Parties.”

His call was supported by the G77 and China negotiating bloc, whose current chair, Pakistan diplomat Nabeel Munir expressed frustration at the blocking and stalling of negotiations on the proposed Loss and Damage facility.

He told journalists that G77 and China have proposed that the facility be set up here at COP27 and the modalities and operationalisation of the fund can be worked out at the next Conference of the Parties.

“Loss and Damage finance is not charity. It is climate justice. We are not asking for a dole out, said Ambassador Munir.

“At the beginning of COP27 we were told that this an Implementation COP. This conference will not be successful if State Parties don’t show political will to create this financing mechanism for loss and damage.

“The G77 and China are fully united behind this and we hope there will be an acceptance within developing countries that this a just demand that is equitable and should be accepted, said Ambassador Munir.

The group is the largest inter-governmental organisation of developing countries in the United Nations and is a very influential bloc at the climate change negotiations.

Makereta Komai attendance at COP27 is supported by SPREP and Irish Aid.