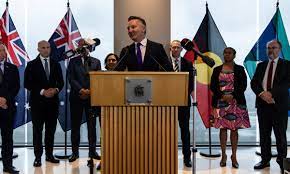 The Australian government will use the UN climate conference in Egypt to launch a bid with Pacific nations to host the 2026 summit and pledge its support for some measures that the country’s previous government rejected a year ago in Glasgow.

The COP27 conference in Sharm el-Sheikh, a small resort city on the Sinai Peninsula, is the first since the Labor government led by Anthony Albanese was elected in May. It arrives for the fortnight-long talks as one of few national governments to have followed through on a commitment made in Glasgow that all countries would re-examine their plans with a view to increasing their commitments this year.

As promised before it was elected, it has lifted the country’s minimum 2030 emissions reduction target from 26 percent to 43 percent (compared with 2005 levels). It recently joined a global pledge to cut methane emissions by 30 percent by 2030, and is expected to announce that it has escalated its support for a global declaration that aims to end deforestation by 2030 by joining a “high ambition” group of countries driving the change.

A major focus of the Australian delegation, led by the climate change and energy minister, Chris Bowen, will be its bid to host a UN climate conference for the first time. The government initially nominated the 2024 summit, but hosting duties are rotated between five country groups, and Australia’s group – western European and other states – is not due until 2026.

Confirming the bid with a joint statement on Saturday, government ministers said they were “committed to working in partnership with Pacific countries to address the climate emergency”.

Longtime observers say the push to bring up to 20,000 people to Australia for a global climate change summit underscores a dramatic shift of tone. Albanese, who attended climate summits as an observer while opposition environment spokesperson more than 15 years ago, has declared the world is facing a climate emergency and that Australia “could be a renewable energy superpower for the world if we just seize that opportunity”.

It is a sharp contrast with where the country stood a year ago. The previous Liberal prime minister, Scott Morrison, had no significant policies to cut emissions, rebuffed repeated calls from global leaders for Australia to raise its commitments for 2030, and was grouped with Russia, Saudi Arabia and Brazil (then under Jair Bolsonaro’s presidency) as nations standing in the way of stronger global action.

Unlike Joe Biden and Rishi Sunak, Albanese is not attending Cop27, a decision that has drawn criticism from cross bench MPs including the Greens, and former Kiribati president Anote Tong. Albanese last said the conference was focused on implementation of previous agreements, not major decisions, and cited other commitments – a sitting week of the Australian parliament followed by a G20 leaders’ meeting in Bali.

Experts said Australia’s delegation was likely to receive praise in Egypt for being a significant improvement on what came before them, but that the applause would be qualified. Australia’s updated 2030 emissions commitment still trails many other developed countries – including the US, UK and the EU – and the government supports a continued expansion of fossil fuel exports, albeit with a reduction in public subsidies.

Australia is the world’s biggest exporter of coal and a leading gas exporter. More than 100 potential fossil fuel projects are registered with the government. It is expected many will ultimately not prove financially viable as investors increasingly look for cleaner options, but Albanese has said they are free to go ahead if they have the necessary backing and can win approval under national environment laws.

Richie Merzian, a former Australian government climate diplomat, now with progressive thinktank the Australia Institute, said the country’s representatives should expect questions about the government’s continuing support for fossil fuels and whether Australia could rejoin the green climate fund, which Morrison quit in 2018, as it lobbied to host a future summit. He said making that case would be “logistically tough”, but possible.

“Morrison was extreme. In comparison, this is a middle of the road government – an Australia with less antagonism, more good faith,” he said. “It is a refreshing change in a number of ways, but still relatively modest in terms of policy.”

At COP27 Bowen is expected to stress the importance of doubling down on renewable energy as the cheapest path through the energy crisis and choppy economic times. The climate scientist Bill Hare, a longtime adviser to developing countries at climate negotiations, said Australia could offer a global leadership role on renewables, and make genuine claims to being a pioneer.

“This is leading-edge rapid development and I know a lot of other countries are watching that,” Hare said.

But Hare said Australia had made little progress in cutting emissions in nearly all other parts of the economy, including buildings, industry and transport. It has one of the lowest take-up rates of electric vehicles in the OECD, and a rapid expansion of liquified natural gas production for export over the past decade has cancelled out many of the emissions cuts in the power grid.

Hare said Australia should expect pressure, including from the Biden administration, to raise its 2030 emissions reduction target, given it was still not enough for the country to play its part in meeting the goals of the Paris agreement. He said the landmark U.S Inflation Reduction Act, which included nearly US$370bn in climate measures, had set a new benchmark for what was possible.

By comparison, a climate bill pushed through the Australian parliament shortly after Labor took power was relatively modest, including emissions reduction targets, but no new policies or funding. The government has promised measures to cut industrial emissions, drive the uptake of EVs, start an offshore wind energy industry and reach an 82 percent share of renewable electricity by the end of the decade, but all are still in development.

“The truth is that Australia has gone from being a laggard to the middle of the road. There is still a long way to go, said Hare.