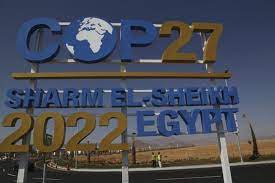 The 27th United Nations Framework Convention on Climate Change Conference of the Parties (UNFCCC COP) has opened in the Red Sea city of Sharm El-Sheikh, Egypt, with a plea from the new COP Presidency for a less adversarial and more empathetic approach, as delegates begin negotiations on different thematic areas to address climate change and its impacts.

World leaders have also been urged not to backslide on commitments to cut emissions and to deliver on pledges to help smaller countries deal with the impact of the climate crisis.

The messages came from speakers during the opening ceremony of COP27 at the Sharm El-Sheikh International Convention Center. The ceremony featured President of COP 26, Alok Sharma, COP27 President, Sameh Shoukry, Executive Secretary of the United Nations Framework Convention on Climate Change, Simon Stiell and the Chair of the Intergovernmental Panel on Climate Change, Dr Hoesung Lee.

The Minister of Foreign Affairs of the Arab Republic of Egypt, Shoukry, who takes over the Presidency role from Sharma, reminded that the science is there and clearly shows the urgency with which the world must act regarding rapidly reducing emissions of greenhouse gases, taking necessary steps to assist those in need of support to adapt to the negative impacts of climate change.

“It comes as no surprise to anyone that the COP is being held this year in a world which is witnessing political turmoil that cast a long shadow on all our nations and has resulted in energy and food crises; however, these challenges should be no reason for delaying our collective effort to fight climate change. It is inherent on us all in Sharm El Sheikh to demonstrate our recognition of the magnitude of the challenges we face and our steadfast resolve to overcome it,” he said.

A positive step for the Pacific was the meeting agreeing during the opening session for “loss and damage” to be placed on the COP27 agenda for the first time, which Shoukry said “reflects a sense of solidarity and empathy for the suffering of the victims of climate induced disasters.”

“We all owe a debt of gratitude to activists and civil society organisations who have persistently demanded the space to discuss funding for loss and damage,” he said, adding the COP process must change its approach to “prove we are serious about not leaving anyone behind.”

COP26 President, Sharma reminded that the time for action is now.

“How many more wake-up calls does the world and world leaders need?” he said. “While I do understand that leaders around the world have faced competing priorities this year, we must be clear as challenging as our current moment is, inaction is myopic and can only defer climate catastrophe.”

Sharma congratulated the 29 countries who have already updated their NDCs, noting that while much progress has been made, there is so much more work that needs to be done in this critical decade.

The Executive Secretary of the United Nations Framework Convention on Climate Change, Simon Stiell called for a shift in implementation, saying it is time to do things differently.

“Today, a new era begins and we begin to do things differently to tackle humanity’s greatest challenge,” he said. “We will be holding people to account, whether they be Presidents, Prime Ministers, CEOs … our actions must align with the Paris Agreement.

“The heart of implementation is that everybody, everywhere in the world, every single day doing everything they possibly can to address the climate crisis. Every one of you brings a unique perspective, perspectives critical to the success of our negotiations.”

The Chair of the Intergovernmental Panel on Climate Change, Dr Hoesung Lee, reiterated that the time for collective action is now. He said the IPCC reports clearly show that the world has the technology and the know how to tackle climate change. However, this is dependent on the commitment to finance what is needed to be done, and urgently, especially for smaller countries who are at the forefront of climate change impact.

“The prerequisite to successful adaptation is ambitious mitigation…” he said.

COP27 in Sharm El-Sheikh marks the 30th anniversary of the adoption of the United Nations Framework Convention on Climate Change.

The 27th Conference of the Parties to the UN Framework Convention on Climate Change (UNFCCC COP27) is being held in Sharm el-Sheikh, Egypt from 6 to 18 November 2022..