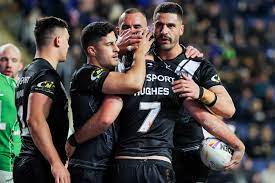 –New Zealand players will use the humiliation of their quarter-final elimination from the 2017 World Cup by Fiji on home soil as motivation to avoid a repeat when the two nations meet in Hull this weekend.

The Bati shocked the Kiwis 4-2 in Wellington a week after the host nation had been beaten by Tonga and the loss still hurts for the eight members of the New Zealand squad who played at the 2017 World Cup.

“We have Fiji next week and we lost to them last World Cup so it is going to be interesting,” Storm forward Nelson Asofa-Solomona said.

“We are building towards more of an 80-minute performance and we will use that [loss to Fiji] as motivation.”

Asofa-Solomona, Dallin Watene-Zelezniak, Jordan Rapana, Jared Waerea-Hargreaves, Joey Tapine and Isaac Liu played in the loss to the Bati, while Peta Hiku and Kenny Bromwich are the other survivors from the disappointing 2017 World Cup campaign.

However, other players who were not involved five years ago are just as determined to ensure the Kiwis don’t suffer the same fate in the current World Cup.

“I watched it, and that was not what I wanted to see,” Sydney Roosters-bound hooker Brandon Smith said.

“I am obviously a proud Kiwi man and that’s not it Bro’. It was very disappointing, but Fiji played very well that day and they got the cookies. We are not going to let that happen again.”

Smith is a key member of a new look New Zealand spine, with halfback Jahrome Hughes, five-eighth Dylan Brown and fullback Joey Manu, that is widely regarded as the best the Kiwis have fielded and they entered the tournament at No.1 in the IRL World rankings under new coach Michael Maguire.

“We just need to ice our opportunities a little bit better than we are,” Smith said. “I think our defence is sound, it’s our attack that we need to work on.

“The only points we have really let in were points we have given away [from handling errors and an intercept]. As long as we go in with that defensive mindset that we have had we can do some good things in this comp.”

Maguire faces a number of selection headaches before settling on his best 17-man line-up, with the Kiwis boasting a glut of middle forwards but being thin in the outside backs.

Second-rower Briton Nikora played in the centres against Ireland last week, with Asofa-Solomona shifting from the middle to an edge forward role.

“I am happy just to be in this team. It is just awesome to have this spine and we are building towards something bigger,” Asofa-Solomona said.

“I prefer the middle because you get the ball more often but there is a lot of people to choose from and obviously Madge is trying to give me an opportunity to show what I have got elsewhere.”

Melbourne coach Craig Bellamy played Asofa-Solomona as an edge backrower at the end of the NRL season but he will revert to prop for the club next season.

“I played second-row back in under 20s but I have played prop most of my professional career so it was a nice little change up when Craig gave me the heads up that I was going to be playing second-row,” he said.

“It gave me some more excitement in my football because when you play on an edge you can be more creative, although I was probably a bit too creative at times. I had a talk with Craig and it’s probably not a position he sees me at in the future, losing the likes of Jesse and Ken [Bromwich].”

The Kiwis will be without Waerea-Hargreaves for the quarter-final against Fiji after he received a one-match suspension for a high tackle in the 48-10 defeat of Ireland.

Niukore (pectoral) and prop Moses Leota (hamstring) have injury concerns and missed the game against the Wolfhounds.