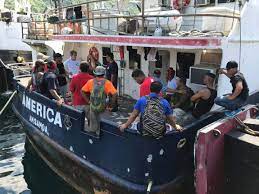 American Samoa Marine and Wildlife Department director, Taotasi Archie Soliai is speaking out about the importance high seas fishing rights for U.S flagged purse seiners that are based in American Samoa and voiced his concerns that reduction of high-seas fishing days will hurt the local economy.

Taotasi offered the comments during last week’s two-day meeting in Honolulu of the Permanent Advisory Committee (PAC) to the U.S Commissioners to the Western and Central Pacific Fisheries Commission (WCPFC), in preparation for the 19th Regular Session of the WCPFC hosted by Vietnam from 27 November to 03 December November.

The U.S National Marine Fisheries Service (NMFS) announced in September this year, a proposed rule that eliminates its use of a combined purse seine effort limit in the Effort Limit Area for Purse Seine (ELAPS), and creates two separate limits of 1,270 days for the high seas and 558 days that could only be fished within the U.S EEZ.

The proposal, in which the U.S is to comply with WCPFC measures, is opposed by American Samoa and argued in a public filing that the move would have a serious impact on the US flagged purse seiners based in American Samoa, as well as the local economy, which is dependent on the tuna industry.

In his prepared remarks submitted for the PAC meeting, Taotasi declared that: “Reducing the number of high seas fishing days available for the U.S flag purse seiner fleet will hurt our economy.”

He noted that this correlation between high seas fishing limits and the American Samoa economy was documented by the U.S National Oceanic and Atmospheric Administration’s (NOAA) own analysis.

“When our American Samoa based U.S flag purse seiner fleet is shut out of the high seas, our economy suffers,” he said, and cited NOAA’s Pacific Island Regional Office and Southwest Fisheries Science Center economic impact analysis of the 2015 ELAPS closure.

And he points to a specific part of the report, prepared by Dale Squires and Valerie Chan: “Our study evaluated the economic impacts of the 2015 Effort Limit Area for Purse Seine (ELAPS) closure to purse seine vessels, canneries and vessel support facilities in American Samoa … The estimated economic losses due to the ELAPS closure ranged from US$11 million to US$110 million depending on the counterfactual period considered.”

However, Toatasi contends that there “appears to be a misconception by NOAA in the importance of the ELAPS.”

For example, he said that in the NOAA Fisheries proposed rule to do away with the ELAPS, there is a footnote that states: “The majority of U.S. purse seine fishing activity in the Convention Area takes place in the waters of Pacific Island Parties (PIPs) to the SPTT, pursuant to the terms of the SPTT (South Pacific Tuna Treaty).”

Taotasi called the footnote “incorrect” saying that the US flagged seiners fish more in the high seas than they do in the PIPs exclusive economic zone (EEZ).

“The reason is simple. They can afford to buy only a limited number of PIP fishing days which cost as much as US$13,500 per fishing day,” he explained.

He argued that if American Samoa’s based U.S flagged fleet cannot afford to buy fishing days from the PIPs and they are shut out of the high seas, they are going to leave the region in search of better opportunities, offloading their catch in foreign ports.

“And American Samoa is going to be left without fish for its tuna dependent economy,” he said. “This possibility is not a myth! We have seen this happen before and it is happening again.”

Taotasi reiterated that the NMFS proposal, eliminating the ELAPS, threatens the existence of this US fleet and the small economy of American Samoa that relies on it.

“The U.S flagged purse seiner fleet is dying. And our economy is dying with it,” he emphasized to the PAC meeting, and explained that five years ago there were approximately 34 U.S flagged purse seine vessels fishing in the Western and Central Pacific Ocean (WCPO) but now, there are only 12 — which is a decline of more than 60 percent.

He also said that fishing activity by the U.S purse seiner fleet in the Eastern Pacific Ocean (EPO) went from zero to 16 in 2019 largely in part due to constraints in fishing days in the WCPO.

“We all know that the further east the fleet moves, the less likely they are to deliver to American Samoa,” he said and shared part of Governor Lemanu Mauga’s comments submitted on the NMFS proposal rule that: “Transferring purse seiner fishing effort from the WCPO to the EPO is going to inflict further damage on American Samoa’s tuna dependent economy.”

Another part of the governor’s letter cited by Taotasi, is Lemanu saying that NMFS needs to change the way that they are regulating the American Samoa based U.S flag purse seiners.

“These vessels are part of our SIDS fleet. They need to be regulated as such,” the governor declared in his letter.

American Samoa in the past requested that NMFS work to grant purse seiners that operate primarily out of American Samoa the privileges of Small Islands Developing States (SIDS) under Article 30 of the WCPFC, as this is to relieve the hardship of ELAPS.

•Does it not bother you that the economy of a marginalized and underserved US territory, recognized in the WCPFC Convention as a SIDS/ Participating Territory, continues to carry a disproportionate burden that is being compounded by our own government regulations?

•Does it not bother you that we are losing US businesses, exponentially, because of an unfair playing field being afforded to other distant water fishing nations?

“We have a very, very serious problem here,” Taotasi said. “However, there is a remedy. We’ve been talking about this solution for the past eight years.”

AND THAT SOLUTION IS: “Use American Samoa’s legitimate status as a small island developing territory by proceeding with the lingering proposed rule-making that distinguishes an American-Samoa purse seine fishery.”

“Affiliate those US flag seiners to American Samoa and regulate them as a SIDS/ Participating Territory fleet. That will entitle them to the same privileges, e.g., unlimited high seas days, as other SIDS fleets,” he explained.

For these reasons, the “U.S should not commit to the WCPFC to eliminate the ELAPS without first exempting the American Samoa based U. S flag purse seiners from high seas limits through recognising a distinct American Samoa purse seine fleet,” he concluded.