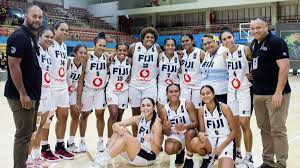 After falling short in 2017, Fiji have redemption, defeating Papua New Guinea to win gold at the FIBA Melanesian Cup 2022.

The Fijian Women flew out of the blocks in the gold medal match with a point to prove against the defending FIBA Melanesian Cup Champions, Papua New Guinea (PNG). At half time the Fijians led by 21 points, and they did not look back with the final score 71-38, to win the gold.

With the crowd spilt between Fiji and PNG supporters, the second half was electric with individual brilliance from Betty Angular supported by the ever consistent, Rosa Kairi and Captain Marcia Muri. However, Fiji held strong with Letava Whippy showing her experience to inspire the likes of Ella Koroi, Mili Koyamainavure and Matila Vocea.

“There are no words, to be able to win this at home in front of our family and friends, it’s just so special,” Whippy said.

“After the last FIBA Melanesian Cup, we had a little bit to prove to ourselves and in front of our home crowd. For me it’s my first time playing in Fiji, over 20 plus year’s I’ve been playing for Fiji, we came out knowing it wasn’t going to be easy and we were going to have to fight from the beginning, no matter what the outcome, every game was a new beginning. We wanted to fight, fight, fight, we did that and came out with the win.

“Shs is such an amazing girl in general, as a person she is so athletic, and she fit right into the team as a netballer, which you don’t see very often. She just has a great personality, and she gives 100 per cent every time on the floor. I hope she stays in basketball in a bit longer.

“I feel quite humble and happy with this victory, I gave my all and you all seen that result on the court,” An Ah Tchung said. “I’m happy to come away with so many points for the tournament, however I did not set out to achieve this, so I’m happy.

“We are happy to be taking home bronze and I want to thank and acknowledge all of our supporters and everyone back home watching the livestream supporting us as well.”

Papua New Guinea and Fiji will now join Guam (FIBA Micronesian Cup 2022 Champions) as official qualifiers for the Pacific Games 2023 to be hosted by the Solomon Islands. The top two teams from the FIBA Polynesian Cup 2022 will also qualify for the event.