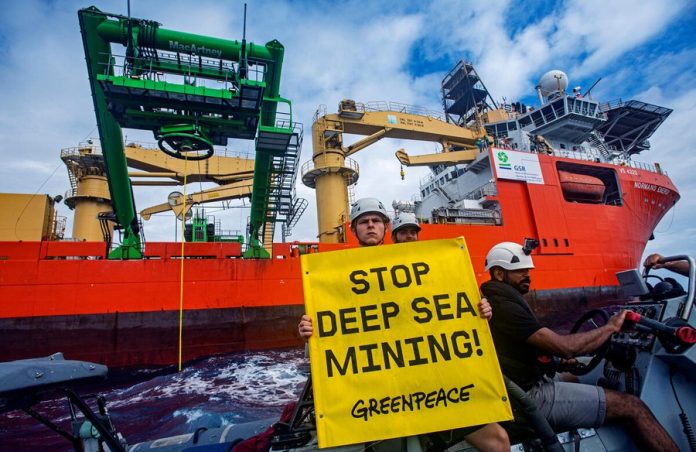 The Greenpeace network is calling on governments entering the latest round of negotiations on deep sea mining rules to follow New Zealand’s lead and boldly and decisively call on the regulatory body, the International Seabed Authority (ISA), to put the brakes on deep sea mining before it starts destroying one of the world’s most important and fragile ecosystems.

Negotiations will be held from 31 October to 11 November at the ISA headquarters in Kingston, Jamaica.

Most recently, the ISA chose to fast-track the greenlighting of The Metals Company’s trial mining, under a non-transparent process that has been questioned by scientists. Nauru Ocean Resources Inc (NORI), a wholly-owned subsidiary of TMC, one of the main companies pushing deep sea mining, started testing mining equipment in the depths of the Pacific Ocean in mid-September.

Arlo Hemphill, Greenpeace USA campaigner on deep sea mining and member of Greenpeace’s delegation to the ISA Council meeting, said: “The ISA has repeatedly shown itself to be unwilling or unable to fulfill its mandate of protecting the deep ocean as the common heritage of humankind. Despite scientists’ warnings that deep sea mining may lead to irreversible biodiversity loss and the disturbance of large carbon sinks — a critical resource in the fight against climate change — the ISA is enabling companies to mine the seafloor on a commercial scale as early as 2023. States must take back control of the ISA.”

Hemphill continued: “This latest move from the mining industry should be a wakeup call for all the nations that portray themselves as protectors of the oceans. Deep sea mining is poised to damage vast swaths of seafloor in 2023. Governments have a responsibility to make sure this never happens.”

Negotiations at the ISA to start commercial deep sea mining are at stark odds with the growing movement against deep sea mining, with Pacific nations, civil society organisations, youth groups, political leaders, members of parliaments, and technology and car companies calling for the practice not to start. Yet, except for a few countries like Costa Rica and Chile that have called for caution, opposition to deep sea mining has been largely muted at the ISA itself.

Hemphill continued: “Governments have been far too passive in holding the ISA to account. While they are negotiating agreements to combat the climate crisis and halt and reverse biodiversity loss, an obscure international regulator is undermining their efforts by advancing deep sea mining. It is crucial that delegates boldly and decisively speak up during this round of negotiations to reaffirm the commitments they have made to protecting the ocean and truly preserve it as the common heritage of humankind.”

James Hita, Greenpeace Aotearoa seabed mining campaigner, said: “We applaud the strong and ambitious position taken by the New Zealand government to stand up for ocean protection, reflecting the values of thousands of New Zealanders who join many of our Pacific neighbors and countless civil society groups in the call to press pause on deep sea mining.”

Hita continued: “While we all stand to be affected by the impacts of deep sea mining that could extend to fisheries and the deep-sea’s climate regulatory functions, the greatest risks would be faced by vulnerable coastal communities, and any benefits would line the pockets of very few industry players in wealthy countries. For generations, Pacific peoples have been pushed aside and excluded from decision making processes that directly impact them. Deep sea mining is yet another example of neo-colonial exploitation of Pacific islands.