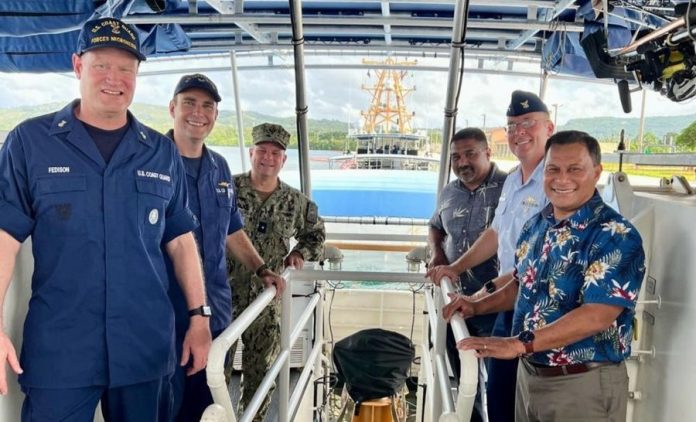 The U.S and the Federated States of Micronesia (FSM) have begun exploring future plans to establish military facilities in the Pacific nation, which is now part of the U.S homeland defense strategy.

During the recent Joint Committee Meeting held on Guam, U.S and FSM delegations created a Defense Sites Working Group to identify the “appropriate processes for establishing defense sites in the FSM for the increased defense of rules-based international maritime law in the region,” according to the Joint Region Marianas.

“Today we begin to regain some momentum on past efforts and look forward to new defense initiatives,” Rear Admiral Benjamin Nicholson, commander of the Joint Region Marianas, said during the committee meeting held from 11 – 14 October.

The meeting was capped by the signing of the expanded shiprider agreement, in which the FSM authorises the U.S Coast Guard to patrol its waters and “to act on behalf of the FSM in combating illicit maritime activity and to strengthen international security operations.”

The expanded agreement is aimed at stunting China’s ability to make further headway into the Pacific region, where it attempts to expand its presence.

“This capability is a true and symbolic realisation of the integration of our homelands as one, as established by the Compact of Free Association, and will strengthen not only the maritime security of both our nations, but the bonds of partnership we share,” said Nicholson, Indo-Pacific Command’s senior military official for the FSM.

“In July 2021, the Department of Defense’s Indo-Pacific Command reinforced the U.S’s commitment to the FSM and the Micronesian region through its announcement of their inclusion in the Indo-Pacific Command’s ‘Pacific Homeland’ plans for defence,” the U.S State Department stated in the Integrated Country Strategy for FSM, which was released in April.

“The significant defense responsibility for this vast region does come, however, with a need for additional support which, if properly invested in, could help avoid the dispersal of critical defense assets and secure this key, strategic region,” the State Department said.

Besides maritime patrol of the FSM waters, the U.S has pledged civilian and military infrastructure projects for the FSM.

One of the major projects financed by the U.S government is the rehabilitation of the Yap airport runway, which will be used by the U.S military “when needed.”

The US$36 million project, currently underway, is funded by the Federal Aviation Administration.

The Compact of Free Association, whose expiring provisions are currently under renegotiation, provides economic packages for the FSM and visa-free entry for its citizens in exchange for the U.S military’s access to the country’s air, land and waters.

“We have serious regional defense challenges, but they remain within our collective ability to overcome,” Nicholson said.

Officials said this year’s JCM agenda “was guided by four lines of effort including defense responsibilities; law enforcement capacity building with a range of capable partners; securing the Blue Continent’s maritime resources and sovereign borders; and preparing to respond to hazards unique to Pacific Island communities.”

“We’ve talked at length about construction projects to improve civil and military infrastructure for the Federated States of Micronesia,” Nicholson said.

“From elementary schools to port and harbor repairs, we are invested in building your communities and securing the defense of the FSM and protecting her people,” he added.

According to the State Department, Washington’s mission is to assist the FSM in developing its own capacity and creating a more sustainable economy “without relying on less benign players seeking influence in the region, said Nicholson.