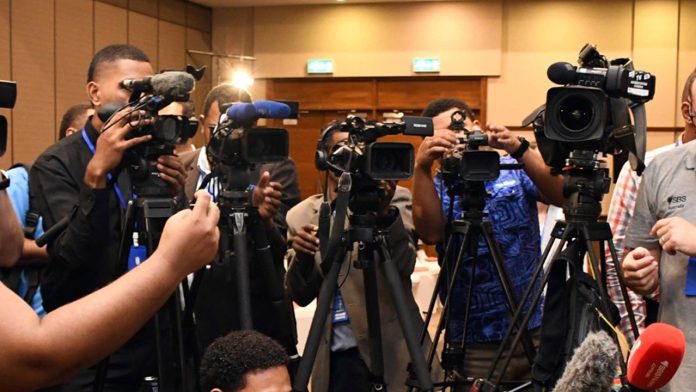 A Fiji-based academic challenged the Pacific region’s media and policymakers Wednesday over climate crisis coverage, asking whether the discriminatory style of reporting was a case of climate injustice.

Associate Professor Shailendra Singh, head of the journalism programme at the University of the South Pacific(USP), said climate press conferences and meetings were too focused on providing coverage of “privileged elite viewpoints”.

“Elites have their say, but communities facing the brunt of climate change have their voices muted,” he told the Look at the Evidence: Climate Journalism and Open Science webinar panel exploring the role of journalism in raising climate awareness in the week-long Open Access Australasia virtual conference.

Dr Singh, who is also on the editorial board of Pacific Journalism Review and was speaking for the recently formed Asia Pacific Media Network (APMN), threw open several questions to the participants about what appeared to be “discriminatory reporting”.

“Is slanted media coverage marginalising grassroots voices? Is this a form of climate injustice?” he asked.

He cited many of the hurdles impacting on the ability of Pacific news media to cover the climate crisis effectively, such as lack of resources in small media organisations and lack of reporting expertise.

“We are unable to have specialist climate reporters as in some other countries; our journalists tend to be a jack-of-all-trades, and master of none,” he said.

He did not mean this in a “disparaging manner”, saying “it’s just our reality” given limited resources.

• The smallness of Pacific media systems;
• Limited revenue and small profit margins;
• A high attrition rate among journalists (mostly due to uncompetitive salaries);
• Pacific journalists “don’t have the luxury” of specialising in one area; and
• No media economies of scale.

“Our journalists don’t build sufficient knowledge in any one topic for consistent or in-depth reporting,” he said. “And this is more deeply felt in areas such as climate reporting.”

A research fellow with the Reuters Institute and Oxford University, Dr Jackson carried out research on how media in her homeland and six other Pacific countries were covering climate change. The report was titled Staying Afloat in Paradise: Reporting Climate Change in the Pacific.

Pacific journalists and editors “have a responsibility to inform readers on how climatic changes can affect them, she argued. But this did not translate into the pages of their newspapers.

“Climate change is simply not as high a priority for Pacific newsrooms as issues such as health, education and politics which all take precedence over even general environment reporting,” Dr Jackson wrote.

“For a region mainly classified by the United Nations as ‘least developed’ and ‘developing’ countries, it is apparent that there are more pressing issues than climate change.

“But the fact that the islands of the Pacific are already at the bottom end of the scale in regards to wealth and infrastructure, and the fact that climate change is also threatening the mere existence of some islands, should make it a big story. But it isn’t.”

Daalder spoke about how open access to scientific papers was vitally important for journalists who needed to read complete papers, not just abstracts. He was critical of the paywalls on many scientific research papers.

Open access enabled journalists to do their job better and this was clearly shown during the covid-19 pandemic — “and we need this to happen for climate reporting”.

Meduna said it took far too long for research, such as on climate change, to filter through into public debate. Open access helped to reduce that gap.

She also said the success of The Conversation model showed that there was a growing demand for scientists communicating directly with the public with the help of journalists.

Dr Sparrow called for a social movement for meaningful action on the climate crisis and more scientific literacy was needed to enable this.

Highly critical of the “dysfunctional” academic publishing industry, he said open access would contribute to “radically accessible” science for the public.

The panel was organised by Tuwhera digital and open access publishing team at Auckland University of Technology.