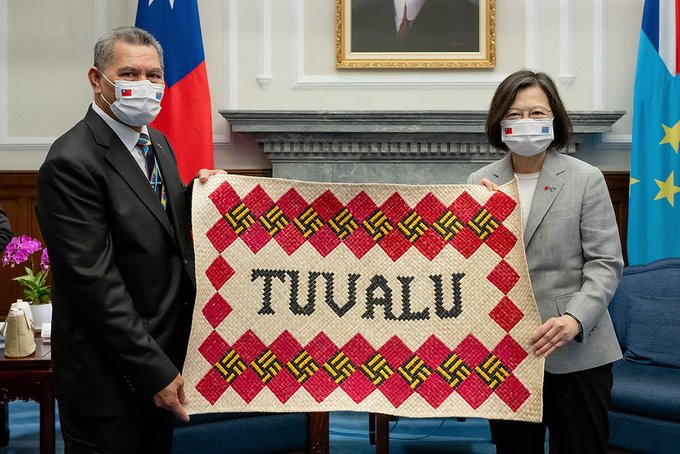 In his recent visit to Taipei, Tuvalu’s new Prime Minister Kausea Natano declared that Tuvalu would ‘continue to stand firm in [its] commitment to remain a lasting and loyal ally of the Republic of China [Taiwan]’. With Solomon Islands moving closer to China following its break with Taiwan in 2019, it’s worth examining why Taiwan’s link with Tuvalu endures.

Taiwan has long sought to have some official diplomatic recognition because this has symbolic importance in affirming its statehood. These ‘diplomatic allies’, as Taipei calls them, can voice their support of Taiwan at international forums from which Taiwan is excluded, most notably the United Nations. Taiwan has been obliged to provide potential allies with financial incentives to make the establishment of official relations worth the trouble. As Taiwan faces budget constraints, countries extending official diplomatic recognition to Taiwan have either a small population or a low GDP per capita, or both.

Tuvalu is the longest standing Pacific ally. But the length of the Tuvalu–Taiwan relationship alone cannot explain its durability.

If Taiwan’s Pacific allies have anything in common, it is that they have a relatively high GDP and small population compared to their neighbours. With the exception of the Cook Islands and Niue, that are in free association with New Zealand, Taiwan’s remaining diplomatic allies have the smallest populations in the region. Except for the Marshall Islands, they also have a higher GDP per capita than the countries which have switched their position on Taiwan or never had official relations, again with only the exceptions of the Marshall Islands, the Cook Islands and Niue.

Population and wealth help to explain why Taiwan’s ties with Tuvalu have endured. A smaller population means less prestige as an ally, which makes Tuvalu a low priority for Beijing in its efforts to diminish Taiwan. Beijing also provides smaller countries with less incentives to switch. A small population also means it’s much harder for pro-China leaders to convince their compatriots that the tied loans and big construction projects that Beijing favours will be economically viable. This was the case even before the problems associated with these loans started flooding in from around the globe.

Wealth likely contributes to this scepticism of Beijing. Higher wealth correlates with better institutions and greater human capital, meaning that stakeholders can better evaluate the prospects of embracing Beijing over Taipei. Washington is further shifting the calculus in favour of maintaining ties. The US State Department commended Tuvalu for its ‘unwavering support for Taiwan’. There is a provision in Washington’s new Taiwan Policy Act to provide ‘appropriate assistance’ to countries subject to Chinese economic coercion due to their support for Taiwan. Recently, the US teamed up with Taiwan to enhance the economic prospects of women in Palau, Nauru, Tuvalu and the Marshall Islands.

In 2019, Tuvalu’s Foreign Minister Simon Kofe said that Chinese companies had approached local communities, offering a US$400 million project to build artificial islands to mitigate the effects of climate change — an existential issue for Tuvalu. Kofe told the media that the offer was rebuffed, stating the proposals ‘are lessons for other countries to be careful and be conscious of those negative impact[s] … it’s not good for our Pacific fellow brothers and sisters’.

Natano’s statement during his visit to Taiwan, which emphasised that, ‘the cornerstone of bilateral ties is the shared principles of democracy, trust, human rights and individual freedoms’, should not be dismissed as mere rhetoric. Tuvalu uses Taiwan ‘to identify Tuvalu as a moral actor on the world stage’. One explanation for Tuvalu’s longstanding relationship with Taiwan is its Christianity-related traditional opposition to the Chinese Communist Party. The decision of Tuvalu’s foreign minister to pull out of the 2022 United Nations Ocean Conference in Portugal after China blocked three Taiwanese in Tuvalu’s delegation from participating should be understood in the context of Tuvalu’s identity, rather than solely the result of Taiwanese support.

Still, Taipei is not completely confident in the relationship. There were some initial jitters concerning the election of Natano. But given the history of the relationship and the growing international resistance toward China and support for Taiwan, there is no reason to assume Tuvalu will join Solomon Islands in cutting relations with Taiwan

Joel Atkinson is Professor at Hankuk University of Foreign Studies.