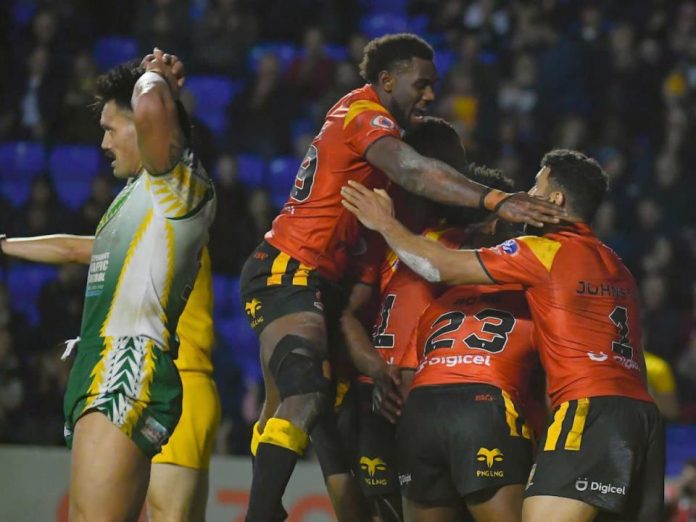 A brave Cook Islands outfit handed Papua New Guinea an early scare before the Kumuls powered away in the second half to win 32-16 at Halliwell Jones Stadium in Warrington.

After only two points separated the proud rugby league nations at half-time, but the second stanza was all the Kumuls, running in four tries in 27 minutes to put themselves back on track for a quarter-final campaign.

After Papua New Guinea conceded an early penalty for stripping the ball, instead of maintaining the pressure, the Cook Islands opted for an early penalty and winger Steven Marsters converted off the post to open the scoring.

The Kumuls opened their account in the 14th minute when Rodrick Tai left the Kukis defenders in his wake and ran 80 metres to score a sensational PNG try.

Come the 23rd minute and PNG had their second try when five-eighth Kyle Laybutt jinked and danced his way across the defensive line 10 metres out before crashing right of the uprights to score.

PNG went down to 12 men with 12 minutes to go in the first half when prop Mackenzie Yei was sin binned for a dangerous tackle.

Wasting no time capitalising on the extra-man advantage, the Cook Islands found an overlap on the left side and halfback Esan Marsters saw the chance to get winger Paul Ulburg over the line with quick hands and bring the score 10-8 at the break.

Kicking off the second half, it was Yei looking to make up for lost time, charging right through the Kukis defensive line off the kick off and surging upfield before finally being caught by Kayal Iro.

Yei’s barnstorming hit up gave PNG position the field position they needed and skipper Rhys Martin finished off the set, spinning over the line from close range to ground the ball.

The Kumuls went further ahead early in the second half when South Sydney star Alex Johnston beat multiple defenders to find Tai inside who touched down for a double.

Come the 57th minute and Melbourne Storm centre Justin Olam created something out of nothing for the Kumuls, breaking the line and getting an arm free to offload to Lachlan Lam, who runs in to score and extend PNG’s lead 26-8 with the kick.

The Kumuls put the game out of reach when Johnston capitalised on a premature rush from the Cook Islands defence and put the ball on a string for Olam.

The Cook Islands continued to fight to the end with tries to Anthony Gelling and Iro but 32-16 is as close as Tony Iro’s men would come to reducing the deficit.

“We are really delighted with that win. We started a bit slow there but we regathered, especially in that second half and it feels good to take home the win. I thought our spine could have done a little bit better, especially with their kicking but wins are hard to come by, especially in our pool so we’re happy with that. We’ve got a short turn around so we’ll look at resting up as much as we can before our next game,” said Papua New Guinea coach Stanley Tepend.

“I think a couple of defensive lapses gave away a couple of simple tries that really turned the momentum of the game but they tried hard so I was really proud of that. The front rower making 60 metres off the kick off didn’t help so I think the first try in the second half dampened our confidence a little bit. They stuck to the task but we just lacked a bit of intensity in that second half,” said Cook Islands coach Tony Iro.

Papua New Guinea face Wales on 01 November in their final hit-out before heading into the quarter-finals.

Cook Islands will need to produce a stunning upset over Tonga to keep their tournament alive in the last of the pool matches in Middlesbrough.