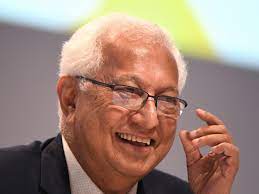 Dr Robin Mitchell has arrived for the Association of National Olympic Committees (ANOC) General Assembly here, where he is set to be confirmed as the permanent President of the global body.

The Fijian official has led ANOC on an interim basis since 2018 and is the only candidate in the Presidential election to succeed Kuwait’s Sheikh Ahmad Al-Fahad Al-Sabah, who temporarily stood aside four years ago after being charged with forgery in Switzerland.

Sheikh Joaan is standing for the senior vice-president role.

If the election of both candidates is rubber stamped at the ANOC General Assembly in Seoul on Wednesday (19 October) and Thursday (20 October), they would serve four-year terms running until 2026.

Dr Mitchell is also due to head up an ANOC Executive Council meeting tomorrow prior to the start of the General Assembly.

National Olympic Committees have began their arrivals in Seoul, with ANOC secretary general Gunilla Lindberg welcoming the 204 set to take part in the General Assembly, mostly in person.

Guatemala and North Korea are the only expected absentees, due to their suspensions by the IOC.

German official Bach, who has led the IOC since 2013, is set to deliver a keynote speech to delegates at the COEX Convention Centre in South Korea’s capital Seoul during the ANOC General Assembly.

Yoon succeeded Moon Jae-in as the South Korean head of state in May of this year.

During the talks with sports administrators, Yoon offered his backing to the General Assembly, set to be staged in Seoul, and said he “deeply appreciates the dedication and hard work of ANOC to practice the Olympic spirit of peace and reconciliation through sports at a time when everyone is experiencing trouble due to the pandemic and international disputes”, as reported by Yonhap.

South Korea had originally been due to stage the gathering of National Olympic Committees in 2020, but the event was cancelled that year and moved to Crete in 2021 because of the COVID-19 pandemic.

IOC President Bach delivered messages virtually at the General Assemblies of the Olympic Council of Asia in Cambodia earlier this month and Panam Sports in Chile, having attended the European Olympic Committees and Oceania National Olympic Committees gatherings in-person earlier in the year.

During the start of his trip to Seoul, Bach has also met with the Organising Committee of the Gangwon 2024 Winter Youth Olympic Games.

Gangwon is due to stage the fourth Winter edition of the Youth Olympics from 19 January to 01 February 2024, with approximately 1,900 athletes expected to take part.

Bach had been due to travel to Tokyo to attend an event marking the first anniversary of the Olympics and Paralympics held in the Japanese capital prior to the ANOC General Assembly, but pulled out “due to scheduling reasons”.

In October 2020, Bach received the Seoul Peace Prize, which included a US$200,000 (£175,000/€203,000) reward donated to the Olympic Refugee Foundation and three other social charities.
The award was collected on his behalf by Ban.

Bach received praise from the Seoul Peace Prize Cultural Foundation for his “contribution to peace through sport in the Korean Peninsula and Northeast Asia” with reference to the Pyeongchang 2018 Winter Olympics, support for refugees and internal IOC reforms through Olympic Agenda 2020.

Solomon Islands through to final after thrilling win over PNG