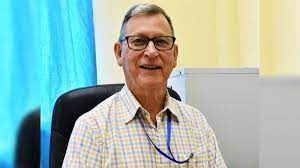 The Fijian Elections Office(FEO) announces the appointment of Robin Boyd as Deputy Supervisor of Elections (DSoE) for the 2022 General Election.

In announcing the appointment of the new DSoE, the Supervisor of Elections, Mohammed Saneem said: “Considering that the election can be announced any time, and since Craig had to return for medical attention, it was imperative that the DSoE position is duly filled.

“Boyd has over 40 years of election experience from the Australian Electoral Commission and holds expertise in the areas of electoral administration, management of major electoral events, capacity building as well as staff mentoring.”
Boyd served as the Director of Operations during the 2014 General Election in Fiji and has remained a Senior Election Advisor to the FEO since 2015.

Apart from Australia, Boyd has experience working in elections in countries such as, Papua New Guinea, Cambodia and Namibia.

“The FEO team is pleased to have Boyd on board and we look forward to his contribution to the 2022 General Election,” Saneem said.

Meanwhile, Supervisor of Election Mohammed Saneem says the Fijian Elections Office has already ensured that the law was complied with and while doing so, some parties have gone ahead and made a complaint themselves to Fiji Independent Commission Against Corruption(FICAC).

Saneem was responding to the Fiji First removal of its party banner that was placed on the Suva City Council car park.

Last week, the Fijian Elections Office said since the matter has been reported to FICAC, it will not make any further comments on the issue.

Parties including the National Federation Party, Fiji Labour Party and the People Alliance have raised concerns why Saneem did not refer the probable breach of the Electoral Act to FICAC.

Saneem also expressed his concern, saying that he was disturbed about the theatrics surrounding the incident.

Australian troops in PNG for election