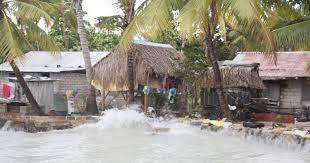 The Pacific region is facing a perfect storm of climate change-induced disasters and debt burdens according to a new report.

After the pandemic and international cost of living increasing, the stability of the Pacific is predicted to be catastrophic as climate change burdens economies even further.

The Twin Cloud report by Caritas Oceania and Jubilee Australia Research Centre is the first report to look into detail at debt and climate change combined.

The report said the Pacific needs US$1 billion per year in adaptation costs but only half this amount is currently being made available.

It said transparency around climate finance is also a problem with funding often diverted to infrastructure projects rather than to communities in need.

The authors of the report are calling for more transparency and urging donors to commit to sending climate finance through regional financial mechanisms like the Pacific Resilience Facility which they say will give Pacific institutions more control over funding.

An advocacy and research officer at Caritas Papua New Guinea Reilley Kanamon said this way approved funds will reach communities that need them the most.

“What we are trying to advocate in Caritas Papua New Guinea is to give the community the voice, empower them with the resources, so that they are able to come up with the local solutions. Not the current way, in which we are doing by bulldozing additions, thinking that our approaches are decisions done at the UN meeting and COP,” Kanamon said.

It also recommends funding be given in the form of grants rather than loans.

“We really need to reform this really broken global finance and offer better options for debt release particularly after. So, we would really like to see that money being provided as grants rather than definitely not as loans, to avoid increasing that Pacific island debt,” she said.

The report which took four months to be completed was sent to be reviewed by a wide range of experts around the world to get additional input.

It will be taken up to Fiji for the Pacific regional talanoa on 17 October, so that its recommendations can be considered in developing the Kioa Climate Emergency Declaration, to help solidify a Pacific civil society position at Cop27.

A policy director at Jubilee Australia Fyfe Strachan said the report will be constructed by leaders in a way as to best represent the people most in need in the region.

“Caritas members will be from Caritas Fiji and also from Caritas Australia will be taking this report to that workshop, with the view to be able to share the recommendation to that space. If that resonates with the concerns of other groups of civil societies that could help feed into that COP process.”

COP27 will be the stepping stone to attracting large climate finance donors such as the US and China, the EU, Japan, New Zealand and Australia.

The UN’s SCC shortlisting process marks China as a developing country under that system and not a donor but it has been a large donor for climate change-related funding.

Strachan said that there is this whole separate picture where some of the money comes from China.