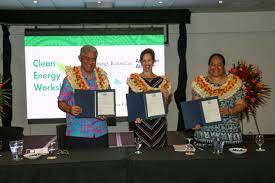 The Pacific Community (SPC) is supporting the region’s transition to climate friendly and cleaner energy as fuel prices continue to rise globally.

“Our world is facing an energy crisis, the cost of fuel has skyrocketed globally, and we in the Pacific are not immune to the shocks of increasing costs,” said Mereseini Rakuita, SPC Principal Strategic Lead- Pacific Women.

“This is a burden on our blue Pacific region and on our communities and families across the Pacific,” said Rakuita.

She said the Pacific relies on fossil fuels to drive energy systems and to turn on our lights.

“Pacific leaders have declared their intention to make the region carbon neutral by 2050.

“This is expected to not only support the Pacific sustainable development targets, but also help to spur economic activities and job creation as the region increases its investment in clean energy infrastructure as lead agencies supporting the Pacific Island countries and territories energy transition from fossil fuel to renewable resources,” Rakuita adds.

The Secretariat of the Pacific Community (SPC) has partnered with the United States Department through the Bureau of Energy Resources and the U.S Embassy in Suva to support Pacific Islands clean energy transition and climate adaptation efforts.

“SPC is working with many partners, including national, regional and international agencies to realise 100 percent energy access and ultimately to achieve carbon neutral economies in our region.”

Rakuita said the current energy crisis further emphasises climate change challenges as the greatest challenge for our blue Pacific, and the need to continue to make a consolidated effort towards less reliance on fossil fuels, and to rapidly accelerate renewable energy and energy efficiency initiatives for the region.

“Renewable energy assists in the fight against climate change and can increase specific resilience,” Lochman said.

“One aspect of resilience involves deepening and deploying renewable energy and battery storage to bolster sustainability and energy security.

However, she said doing this is not easy.

“It requires training, funding and innovation. But the end goal of energy independence, not needing to rely on imported fuel, or sacrificing 100 percent Energy Access is well worth it. If done right, clean energy systems will also prove to be more climate resilient, and Disaster Resilient than current systems that rely on fossil fuels.”

In efforts to this, the Secretariat of SPC with the U.S Department of State’s launched the Women in Energy Strategy.

“Women’s leadership and participation throughout the energy sector has never been more crucial for success, because diverse voices spur innovation, and women and children traditionally suffer the most from the negative impacts of climate change – from changes in water availability and loss of subsistence crops, to health effects and loss of economic or educational opportunity,” said Lochman.

“When we look at the energy sector, many barriers still stand in the way of women’s entry. Ensuring women’s contributions in traditionally male dominated sectors such as energy brings tangible economic outcomes for women, families, communities, and economies.

“The women in energy strategy goes beyond existing capacity building for women by seeking to support equally important institutional reform.