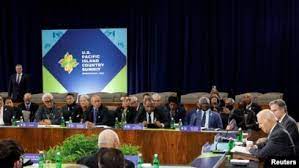 U.S President Joe Biden’s administration has announced a slew of new programmes to substantially broaden the United States’ presence in the Pacific.

The U.S has promised to expand police training, sign new defence pacts, boost investment in the region, ramp up development initiatives and plough more than US$75 million into helping Pacific economies recover from the COVID pandemic.

The U.S will also move to extend full diplomatic recognition to New Zealand’s two associated states in the Pacific — Cook Islands and Niue — in another sign it wants to expand its influence in the South Pacific.

Biden unveiled a new U.S Pacific strategy while welcoming Pacific Island leaders to the White House on the second day of a high-level summit in Washington DC.

The strategy promises to “elevate broader and deeper engagement with the Pacific Islands as a priority of U.S foreign policy” to help the region fight climate change and other pressing challenges.

It also explicitly links the U.S strategy to China’s growing presence in the region, warning that “pressure and economic coercion by the People’s Republic of China” risks “undermining the peace, prosperity, and security of the region, and by extension, of the United States”.

The White House said the announcements amount to more than U$S810 million in expanded programs – although that figure includes US$600 million for fisheries assistance over a decade already pledged by Vice-President Kamala Harris at the Pacific Islands Forum earlier this year.

The U.S also flagged it had now secured universal support for a joint declaration with Pacific Island leaders to be unveiled on Friday despite Solomon Islands telling other Pacific nations earlier this week it wasn’t ready to sign on.

The new U.S announcements cover a wide array of different programs and initiatives, both new and existing, although the funding packages offered are sometimes modest.

The U.S has confirmed it will expand the footprint of USAID in the region, opening a regional mission in Fiji’s capital within 12 months and opening a new office in Papua New Guinea.

It has also chosen former Ambassador to Fiji Frankie Reed as its first-ever US. Envoy to the Pacific Islands Forum.

Australia has long been Solomon Islands’ main security partner, but China has recently made significant gains in the country, signing a contentious pact and beginning a police training program for local forces.

Anna Powles from Massey University said some of the new announcements showed how security cooperation was a “key pillar” of US engagement in the Pacific.

“This is reflected in the reference to an increased defence presence in the Pacific, negotiating a defence cooperation agreement with PNG, and the new [defence pact] with Fiji as well as law-enforcement training by the FBI,” she said.

“The U.S strategy calls out China as a source of geopolitical pressure and economic coercion felt by PIF member states and makes a direct link between Chinese actions undermining peace and security in the region and the US’s own security.

“Good intentions aside, this is the call to arms that is driving U.S engagement.”

The United States has also announced a raft of climate, education, investment and infrastructure initiatives.

In addition, it will plough another US$18 million into a major program to expand electrification through Papua New Guinea.

The Biden Administration has also promised more than US$130 million to help Pacific nations tackle climate challenges and leverage financing to help build resilience, predicting it could draw in US$400 million in private capital.

Tess Newton Cain from the Griffith Asia Institute’s Pacific Hub said the initiatives demonstrated the strength of U.S intent in the region, but warned that the program could quickly falter if it didn’t draw on local expertise and priorities.

“The Americans want to move with breakneck speed but the elephant in the room is the question of coordination and coherence across agencies,” she said.

“There are a few references to this being demand led, but the overall tone is one of this being supply led. There’s not enough understanding of what’s already happening, and especially what is being developed through local leadership.”

Dr Powles said the Biden Administration was intent on locking in its Pacific strategy and tackling its key priorities in the region ahead of approaching US House and Senate elections.

“There’s clearly a desire to move fast and bed down commitments quickly. The tempo may slow down in the lead up to November midterm elections and afterwards,” she said.

“But it is less clear how the U.S system will deliver the strategy; including building the infrastructure to do this, and that’s where it could fall down.

“If you aren’t building Pacific knowledge and expertise then you’ll hit problems. It’s that coordination piece which is missing in Washington,” she said.

Cocaine, geography and Covid-19, drug trafficking in the Pacific