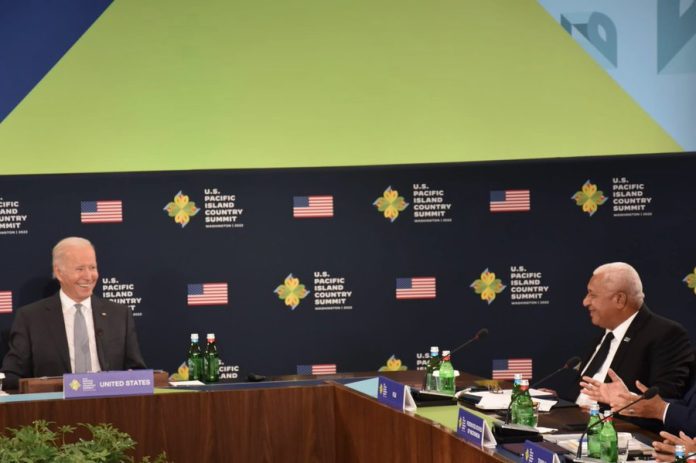 The White House today unveiled a Pacific strategy designed to bolster US engagement with more than a dozen island nations on issues including climate change and maritime security while pledging to expand the U.S diplomatic presence in the region.
U.S President Joe Biden.

The Biden administration released its new strategy, as well as plans for US$810 million in new aid for Pacific Island nations, as President Joe Biden prepared to meet with leaders attending the US-Pacific Island Country Summit. The Democratic president was set to address the summit on Thursday (local time) and then host the leaders for a dinner at the White House. Secretary of State Antony Blinken met with leaders at the State Department.

The president’s push to improve relations in Pacific comes amid growing U.S concern about China’s growing military and economic influence. Earlier this year, the Solomon Islands signed a new security pact with Beijing, and ahead of the summit signalled it would be hesitant to sign any end-of-summit statement critical of China.

Among the new initiatives the White House announced are plans to ask Congress to appropriate US$600 million over 10 years to support economic development and promote climate resilience efforts for Pacific fisheries and establish a regional mission of the U.S Agency for International Development in Suva, Fiji. The White House also reiterated previously announced plans to open embassies in the Solomon Islands, Tonga and Kiribati.

The White House also announced plans to recognise the Cook Islands and Niue as sovereign states, after “appropriate consultations.” The US currently recognises the islands as self-governing territories.

“Increasingly those impacts include pressure and economic coercion by the People’s Republic of China, which risks undermining the peace, prosperity, and security of the region, and by extension, of the United States,” the strategy document says. “These challenges demand renewed U.S engagement across the full Pacific Islands region.”

Among the broad strategy aims laid out by the Biden administration in the document are expanding the number of U.S diplomatic missions from six to nine across the Pacific and completing work to renew strategic partnership agreements with the Pacific Island nations of Palau, Micronesia and the Marshall Islands that are set to soon expire. The strategy also calls for increasing the presence in the region of the U.S Coast Guard, the National Oceanic and Atmospheric Administration and the Pentagon.

White House officials acknowledge that U.S inattentiveness toward the region since the end of the Cold War has left an opening for Beijing to exert its influence.

Plans for the summit were announced earlier this month, just days after the Solomon Islands called on the US and Britain not to send naval vessels to the South Pacific nation until approval processes are overhauled. The Solomons in April signed a new security pact with China.

The Solomon Islands signalled it was unlikely to sign on to a joint statement that the U.S hoped to have hashed out by the end of the summit, according to a diplomat familiar with summit planning. The diplomat, who was not authorised to comment publicly and spoke on the condition of anonymity, said the resistance is driven in part by the Solomon Islands’ tightening relationship with Beijing.

The U.S and summit participants are working toward a summit-concluding joint statement that is expected to avoid directly addressing China, but will include calls for upholding freedom of navigation, respect the sovereign rights and territorial integrity of nations in the region, and the urgency of acting on climate change, according to a person familiar with the matter who was not authorised to comment publicly.

Just last week, the Marshall Islands pulled out of a negotiating session with the US over their Compact of Free Association, which expires next year. The Marshall Islands says the U.S isn’t engaging on its claim for proper reparations from the legacy of US nuclear testing in the islands.

The Marshall Islands says there was extensive environmental and health damage from the dozens of tests in the 1940s and 1950s, which a settlement in the 1980s fell well short of addressing.

Besides their meeting with Biden, island leaders are scheduled to meet on Thursday with House Speaker Nancy Pelosi and Commerce Secretary Gina Raimondo.