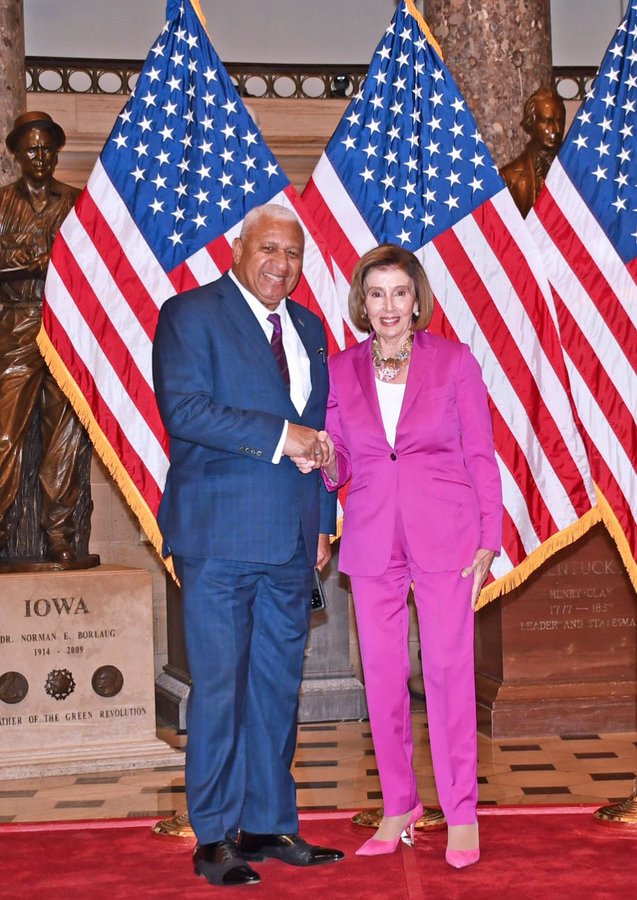 President Joe Biden’s administration on Wednesday rolled out the red carpet for Pacific Island leaders in the face of rising Chinese influence in the region and said it expected a united front, despite friction with one nation — the Solomon Islands.

In a first-of-a-kind summit in Washington, the United States promised greater aid and diplomatic engagement on issues from maritime security to pandemic recovery and climate change, which threatens to devastate many of the low-lying islands.

Opening two days of meetings with 12 leaders and representatives of two other nations, Secretary of State Antony Blinken welcomed the leaders to lunch and assured them, “You can count on the United States partnering with you.”

In a veiled reference to China’s growing assertiveness around the region and across Asia, Blinken called for “preserving a free and open Indo-Pacific where every nation — no matter how big, no matter how small — has the right to choose its own path.”

Blinken said the summit would release a document, adding, “We’ve agreed on it, and it will give us a roadmap for the work that we’re doing in the future.”

His statement came a day after Australia’s ABC reported that the Solomon Islands had privately communicated that it would not sign off on the statement, depriving the summit of consensus. But State Department spokesman Ned Price said discussions had made “tremendous progress.”

The Solomon Islands in April signed a secretive security pact with China, defying warnings from the United States as well as Australia and New Zealand, which are participating in Biden’s summit as observers.

Solomon Islands leader Manasseh Sogavare, accused of creeping authoritarianism, told the United Nations last week his country has been “vilified” and “will not be coerced into choosing sides.”

Western officials and analysts fear that Beijing will use the Solomon Islands as a base to expand militarily into the Pacific or to pressure Taiwan, a self-governing democracy claimed by China.

China has stepped up its presence across the Pacific Islands, pouring in infrastructure spending, ramping up official visits and training law enforcement.

“Perhaps to a greater extent than any other geographic area, the Pacific Islands offer China a low-investment, high-reward opportunity to score symbolic, strategic and tactical victories in pursuit of its global agenda,” said a recent report by a study group under the US Institute of Peace.

Chinese foreign ministry spokesman Weng Wenbin, asked about Biden’s summit, said that Pacific Island nations are sovereign and had the right to build relations with any country.

“Growing relations with the Pacific Island countries is not about seeking a sphere of influence and does not target any third party,” he told reporters.

Biden will meet the leaders on Thursday, a personal touch that US officials hope will help reestablish Washington’s preeminence after long taking for granted a region the United States had dominated since the end of World War II.

As part of a new strategy, the United States will appoint its first-ever envoy to focus on the Pacific Islands and is adding three more diplomatic missions in the region, bringing the total from six to nine, officials said.

Following up on an initiative last week on the sidelines of the UN General Assembly, Blinken promised US$4.8 million to strengthen “blue economies” — cleaner oceans with more sustainable fishing.

He also promised an assertive stance on climate change by the United States, which under Biden has approved domestic action on green energy after years of gridlock and scepticism by much of the rival Republican Party.

“One of the messages that we’ve heard loud and clear from Pacific Island leaders is that building resilience is about more than equipping communities to adapt to the effects of the climate crisis, which for many of you is an existential threat,” Blinken said.

“It’s also about preparing communities to weather a wide range of interrelated shocks that we know have caused cascading effects.”

A U.S official said Washington planned to expand the number of its diplomatic missions in the Pacific from six to nine, to deploy additional personnel across the region, and to re-establish a USAID mission in Fiji.

He said Washington had been “working towards” a joint summit statement “about a larger vision in which that states and Pacific island nations sign up to some joint endeavors which are important.”

Another U.S official said the United States would support island states by increasing its Coast Guard and Defense Department presence and coordinating security cooperation and training with “like-minded partners.” Peace Corps volunteers would also return to Fiji, Tonga, Samoa and Vanuatu this year.

A source familiar with the discussions said the White House was working with the private sector to roll out an agreement on undersea cables for the region, calling it “a reaction to China’s diplomacy and military expansion.”

The Pacific countries are keen for greater connectivity amongst themselves and with allies, however they have repeatedly stressed that Washington should accept their priorities, making climate change – not superpower competition – the most urgent security task.

Micronesian President David Panuelo said on Tuesday participants had been working on a summit declaration – “a vision statement” – that would cover five themes, including human-centered development, tackling climate change, geopolitics and security of the Pacific region and more broadly, as well as commerce and industry and trade ties.

However, efforts to reach a final text ran into problems this week when during a call with Pacific islands ambassadors, the U.S. State Department demanded the removal of language agreed to by the island countries that the United States address the Marshall Islands nuclear issue, three sources, including a Pacific island diplomat, told Reuters.

The State Department did not respond to a request for comment.

Speaking at Georgetown University, Panuelo said: “In any negotiation, there are red lines and then there are things you give and take and you’ll reach some common ground.”

“Every country will have to do what’s in their best interests, but we call on the superpowers when they come in and talk to the Pacific Islands countries that they keep with us on the terms of the issues that are most important for our region,” he said.