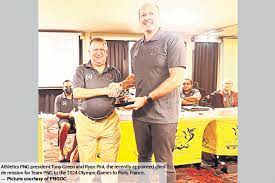 Pini has made a name for himself in the pool on a national and international athletic career spaning over 28 years for Team PNG.

“As one of the most successful Team PNG athletes to the Olympics with a competitive athlete term spanning over 20 years, competing in four Olympics, three Commonwealth Games, five Pacific Games and many world championship events representing PNG, Ryan has always embodied and lived out the four PNGOC character values of honesty, excellence, respect and openess,” Dawanincura said.

“His sporting accolades, character and commitment to sports and life after sports for our young atheltes unquestionably make him the ideal candidate to lead PNG to its 13th Olympic games. “Ryan has been an outstanding role model and mentor for hundreds of Team PNG athletes whilst being a notable member of our Team PNG family over the years.

“Having him lead the 2024 Team PNG delegation to Paris is a testament and culmination of his efforts during and after his sporting career.”

The swim champion is arguably PNG’s most successful athlete to have progressed to an Olympic final in any of the sports and events that PNG has fielded Athletes in since joining the Olympic movement in 1974.

Coincidently, his grandfather Jack Pini was the chef de mission for the first Team PNG contingent to the first ever Olympic Games to the 1976 Montreal Games.

Team PNG will be drawing from Pini’s vast experience as they ramp up their preparations for the Paris games.