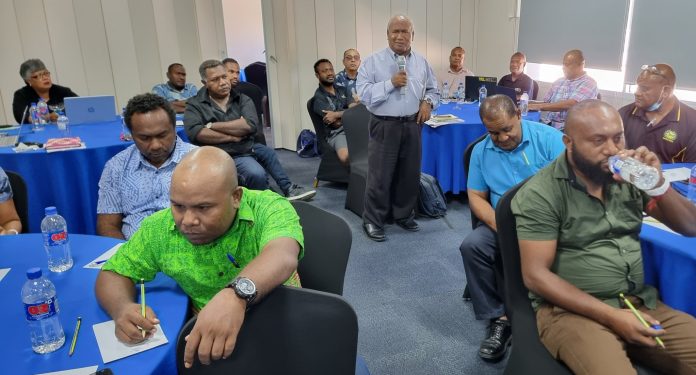 Former Member of Parliament and longtime journalist, Alfred Sasako says Solomon Islands has been engrained by corruption that there seems to be no solution to address the issue.

Speaking during a penal discussion on “Media’s Role in Investigating the Management of Public Resources” Monday, Sasako said the issue continues to be a challenge due to a number of short-falls within the country’s system.

Sasako said the first and most daring issues is that the local anti-corruption agencies have no teeth to bite – meaning these institution were established and guided by legislation but enforcement has been weak.

“The second issues is that, officials who are managing the anti-corruption agencies were chosen or nominated by the government, making it difficult for respective institutions to operate in an independent environment,” he added.

Sasako said substantial evidences of corrupt practices have been published in the media as well as in the statutory documents such as the audit reports, but bringing the issues to court always fall short due to poor enforcement of corruption laws.

He highlights that access to information is also one of the greatest challenges local journalists faced when doing investigations.

Sasako said potential sources always fear retribution from the government that they hold back information of public interest.

He said the Whistle Blower Act, which was passed in Parliament, was a brilliant piece of legislation but there are deficiencies within the act to meet its objectives.

Sasako said movements to make changes have been limited as corruption is deeply rooted in government systems as well as other institutions.

“There is a deep connection within public and private sector within Solomon Islands which encourages corruption practices to continue without interference, making it very difficult for the media to get hold of the lawbreakers.

“That said, corruption is like a normal thing that people turn to ignore as it is seen or becomes legal in the eyes of those who involved in corrupt practices,” he said.

Sasako said corruption can be addressed if there is a right law and enforcement put in place.

He strongly believes that one strategy to stop corrupt practices is for the courts to start prosecuting people who are involved in the practice.

“This will give a strong message to people to stop such practices that cost the country millions of dollars that are supposed to be spent on other important developments,” Sasako said.

Marie Pegie Cauchois, who is the Regional Anti-Corruption Advisor for Pacific UN Office on Drugs and Crime said, corruption is a pervading problem in the world and in the region and it has extensive costs, both in terms of money and in terms of broader social cost.

She explained that corruption shrinks public revenue and cuts spending on education, healthcare and other social services, and thereby undermining the welfare of particularly women and children who rely the most on such services.

“In the region, public service delivery continues to face challenges in the management of public resource management and that affects nearly all sectors of the economy.

“You will all agree that this has been very apparent during the covid crisis.

“The challenges affection the management of public resources are mismanagement, misuse of resources, insufficient and unequal resource allocation and late disbursement of funds but also corruption and this is compounded by limited citizen consultations in the planning, budget allocation processes but also in the accountability and review of the use of this public resources,” Cauchois said.

She said investigative journalism is key to ensure that such issues are not only exposed but also prevented and corrected.

Cauchois adds that reporting and highlighting events of maladministration or mismanagement of public resources is key taking into account to equate to social accountability….