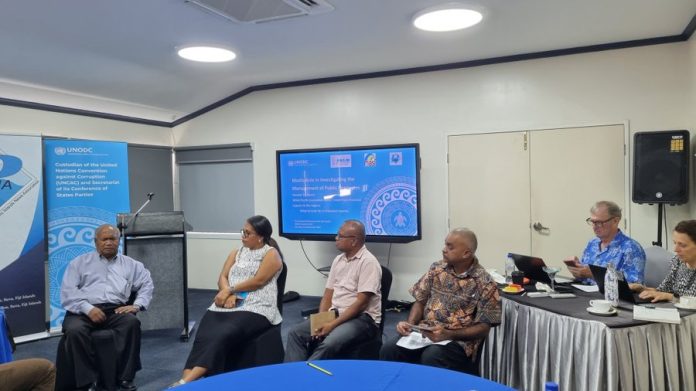 Pacific media owners, editors and senior journalists are urged to investigate corruption in order to prevent and tackle the scourge in their respective countries.

The call comes at a workshop held Monday ahead of the official opening of the 6th Pacific Media Summit this evening in Honiara.

“We all know that corruption is a pervading problem in the world and in the region and it has extensive costs, both in terms of money and in terms of broader social cost.

“Corruption shrinks public revenue and cuts spending on education, healthcare and other social services, and thereby undermining the welfare of particularly women and children who rely the most on such services.”

Cauchois said in the region, public service delivery continues to face challenges in the management of public resource management and that affects nearly all sectors of the economy.

“You will all agree that this has been very apparent during the covid crisis.

“The challenges affecting the management of public resources are mismanagement, misuse of resources, insufficient and unequal resource allocation and late disbursement of funds but also corruption and this is compounded by limited citizen consultations in the planning, budget allocation processes but also in the accountability and review of the use of these public resources,” Cauchois said.

As such, she said investigative journalism is key to ensure that such issues are not only exposed but also prevented and corrected.

Through your work citizens can be equipped with the contextual knowledge they need to effectively hold duty bearers to account for poor service delivery.

“The role of the media in this sphere has evolved and whilst initially it was more “name and shame” of public officials with tracking corruption of particular cases, it is now moving to a theory which places social accountability as a means to tackling systemic dysfunction rather than individual instances of corruption or mismanagement.”

This includes ensuring that budgets and accounts are available for public access, using effective financial distribution policies to manage funds allocated for relief and enabling supreme audit institutions and other relevant entities to perform their functions.

“With a view to improving the conditions of, people in vulnerable situations.

“Those are the commitments of states parties to the UNCAC, let’s be with them and support them, nudge them to comply with those international commitments, by keeping a pressure on those key elements of transparency,” she added.

Tuesday’s pre-summit workshop was part of the week-long event that brings together up to 150 media executives, delegates and practioners from across the region and beyond.

The theme of the summit is The Digital Revolution “ Transforming Threats into Opportunities for the Pacific Media.