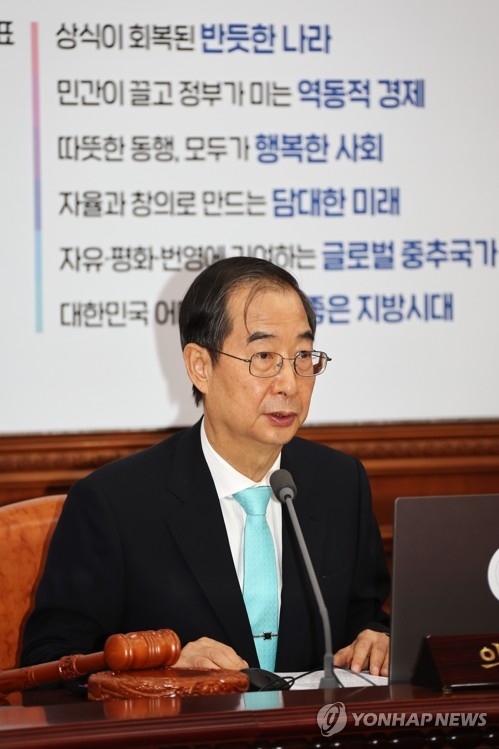 South Korea plans to host an inaugural summit with Pacific island nations next year as Seoul seeks to expand its diplomatic influence in the region, the prime minister’s office said Tuesday.

The plan was approved at a Cabinet meeting presided by Prime Minister Han Duck-soo, the office said.

Holding summit talks with leaders of Pacific island nations is aimed at “promoting the expansion of diplomatic horizons to the Pacific region, where strategic importance is increasing in line with the vision of becoming a globally central country contributing to freedom, peace, and prosperity,” the office said.

The plan comes as the United States is stepping up its cooperation with Pacific island nations at a time when China is courting the region.

South Korea also plans to bolster cooperation with Pacific island nations to help it host the World Expo in the southern port city of Busan in 2030, according to officials.

Last November, foreign ministers from South Korea and 14 Pacific island nations held virtual talks during which they agreed to hold a summit of their leaders.

As they agreed to expand cooperation on climate change and other issues of regional concern, the top diplomats also agreed to increase the frequency of their talks, from once every three years to every other year.

Since 2011, South Korea and the 14 Pacific island nations have held talks of foreign ministers.

Meanwhile, a five-nation grouping that includes Japan and the United States is looking to add members to its framework established in June to support Pacific Islands.

The aim of the Partners in the Blue Pacific, which also includes Australia, New Zealand and the United Kingdom, is to counter the growing influence of China. Beijing has been providing economic support to several Pacific Island nations.

According to Japanese government sources, France, Germany and South Korea are considering to join the framework. The founding nations will hold a foreign ministers’ meeting in New York later this month, coinciding with the United Nations General Assembly, and are making arrangements to have representatives from the three nations attend the meeting as observers.

The group was established to provide support on issues important to Pacific Island nations, such as climate change. By expanding the framework, the founding nations are hoping to enhance their checks on China’s behavior.

France, which has territories in the South Pacific such as New Caledonia, is unnerved about China’s maritime expansion. Germany has compiled a diplomatic strategy for the Indo-Pacific region and is increasing its engagement in the region.

South Korea is also distancing itself from China to a certain extent under the administration of new President Yoon Suk-yeol, which appears to lean toward strengthening relations with the United States.