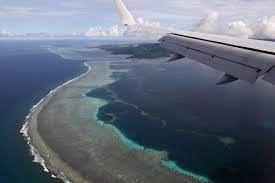 China sees the Pacific islands as an area of significant strategic interest and the US should strengthen its commitment to north Pacific island states to maintain a vital military buffer, a report by a U.S Congress-funded think tank says.

China had made progress in the Pacific on geostrategic goals it has been unable to achieve elsewhere, said the report for the United States Institute for Peace, whose co-authors include former senior military officials.

This was cause for concern but not alarm, the report added, saying the U.S should bolster support for island states in the north Pacific where it had the strongest historical ties.

The report comes ahead of a meeting between U.S President Joe Biden and a dozen Pacific island leaders next week, as Washington seeks to compete for influence with Beijing.

The Marshall Islands, the Federated States of Micronesia (FSM) and Palau are sovereign nations known as Freely Associated States (FAS), after signing compacts in the late 1980s that give the U.S defence responsibility and the right to military bases.

The compacts, which expire in 2023 and 2024, are being renegotiated, and the report warned that these states could look to China for funding if negotiations fail.

“The vast FAS territorial seas, which span much of the northern Pacific, are an important strategic buffer between U.S defence assets in Guam and Hawaii and East Asian littoral waters,” said the report, whose authors include Philip Davidson, a former commander of the U.S Indo-Pacific Command, and David Stilwell, a former U.S assistant secretary of state.

If Beijing were to succeed in bringing one of these states into its sphere, “it would imperil U.S military capabilities in a strategically vital geographic command area and open the door to a broader reordering of regional architecture with implications well beyond the Pacific region,” it said.

A U.S missile defence test range in the Marshall Islands is critical to U.S space and missile-defence capabilities, it added.

Across the Pacific region, China is seeking to enhance its access to ports and Exclusive Economic Zones, frustrate efforts by the United States to project military power, increase intelligence gathering and surveillance capabilities, reduce Taiwan’s diplomatic partners, and promote the Chinese model of political and economic development, the report said.

“China views the Pacific Islands as an area of significant strategic interest,” it said.

Washington needs to provide an alternative to Chinese economic assistance to “counter Beijing’s efforts to capitalise on regional perceptions of neglect and abandonment”.

More resources were needed to monitor China’s increasing activity in the FAS, where Chinese research vessels with “military utility” have been spotted without permission.

The Federated States of Micronesia recently agreed to develop new U.S military facilities, and Palau requested the US build airstrips, ports and bases, which “Washington should consider seriously to the extent that it aligns with defence needs,” the report said.

Australia to support development of new naval base in Fiji