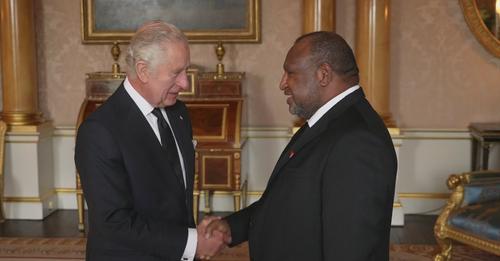 In passing PNG’s condolences, Prime Minister Marape said the late Queen Elizabeth II was a pivotal figure in holding together the Commonwealth and its realms and her life of total service, dignity, tolerance, and kindness is an exemplary one to be remembered for many years to come.

The Prime Minister and his wife, Rachael Marape, were received at Buckingham Palace where King Charles used the time to recount his month-long stay as a schoolboy in PNG in 1966, before moving onto discussing other things including the global matters of climate crisis mitigation, and environment and conservation.

Prime Minister Marape said after the meeting that he was very pleased with the opportunity with the King and the monarch’s recognition of Papua New Guinea’s and Pacific Islands’ plight against global warming and rising sea levels.

The Prime Minister said as the conversation focused on the rainforests of Papua New Guinea, King Charles agreed with his own long-held view that PNG must be remunerated for the preservation of its trees by industrialised, big carbon-emitting countries as a climate crisis mitigation strategy.

“His conversation with me today was totally in line with my own government policy. Forest conservation must not come at the expense of our people’s development aspirations,” said PM Marape.

“For PNG, we are not just a climate change affected nation but we have this important global asset of rainforests that need to be preserved, but at a price – and the King agreed with me. Global carbon emitters must put their money where their mouth is in terms of forest conservation efforts.”

PM Marape said King Charles went further by saying he was willing to mobilise his global network of environment conservationists, climate activists and environment-conscious global corporations to assist PNG in this area of forest conservation.

“I am happy to travel halfway across the world to meet the Head of our country and for him to think consistently with the way I am thinking on aspects of benefits owing to forest conservation is fulfilling. We are a forest nation and if conservation for planet earth’s future is an option then it must be at a premium for our people.

“I have asked him be the global voice for PNG and the small island states and communities including our Pacific on environment, forest conservation and climate change. I said I would speak on these issues at the United Nations General Assembly coming up shortly and he gave me his blessing.”

PM Marape said the conversation with the monarch was “warm and friendly”.

“I thought he was warm and gracious. He accepted me into his presence with warmth, laughter and friendship and I could feel his personal affinity to Papua New Guinea. He talked about the month he spent as a schoolboy in the country, as well as his three other visits to PNG.

“I made the verbal invitation to him again to be our guest of honour at the country’s 50th Independence Anniversary and he accepted. We will follow up with written invitation.”

Prime Minister Marape said the King has long been “a recognised global voice” on environment and climate management issues and to have him as our Head of State and that of the Commonwealth of Nations was an asset to us.

“There might be opinions to the contrary about this being an imperialistic practice, but I am here as his Prime Minister, and belonging to a family of nations in contemporary world has benefits.

“It augers well for our country in our efforts to find trade markets, build our economy, and exchange ideas and expertise as we help each other grow as societies and countries of the modern times,” PM Marape said.